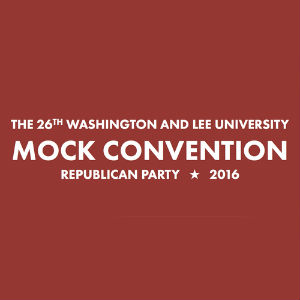 Cheney has served in four presidential administrations and was elected to six terms as Wyoming’s sole member of the U.S. House of Representatives. Bevin, a 1989 graduate of Washington and Lee, was sworn in as governor of Kentucky, his first elective office, on Dec. 8, 2015. He previously has had careers in the manufacturing, investment management and medical device industries. Lowry, in addition to editing the National Review, is a syndicated columnist and Fox News Channel commentator.

The university’s students hold a mock nominating convention focused on the party out of power in the White House during each presidential election year. Since the first “Mock Con” in 1908, they’ve correctly picked the eventual nominee 19 of 25 times. In 14 GOP mock conventions, they have been correct 12 out of 14 times and have not missed in the seven since 1948.

Cheney has been involved in American political since graduating from the University of Wyoming with bachelor’s and master’s degrees of political science. He was first a part-time legislative intern in Wyoming, then an aide to Wisconsin congressman Bill Steiger. He next worked for then-Congressman Donald Rumsfeld and was appointed chief of staff in the Gerald Ford White House. When Ford lost to Jimmy Carter in fall 1976, Cheney returned to Wyoming to run for Congress. He rose to chairman of the House Republican Conference and House Minority Whip.

Bevin attended Washington and Lee on an ROTC scholarship, those rose to the rank of captain in the U.S. Army. He transitioned to the Army Reserve. His career in finance took him to Pennsylvania, Massachusetts and Kentucky, where he founded Integrity Asset Management. In 2008, he took over management of Bevin Brothers Manufacturing of Connecticut, a family business. Defeated in the 2014 Republican U.S. Senate primary, Bevin ran successfully for governor, winning 53 percent of the vote.

Lowry writes for Politico and Time magazine and is a frequent guest on NBC’s “Meet the Press” and public television’s “The McLaughlin Group.” He began his media career as a research assistant for columnist Charles Krauthammer and in 1997 was selected by William F. Buckley to lead National Review, the conservative news and opinion magazine. His book “Paying the Price for the Clinton Years” was a New York Times bestseller.

Cheney, Bevin and Lowry join a number of national political figures scheduled to address Mock Con that includes Ann Coulter, Newt Gingrich, U.S. Rep. Bob Goodlatte and Grover Norquist, among others. A limited number of tickets to observe Mock Con is for sale to the public online.