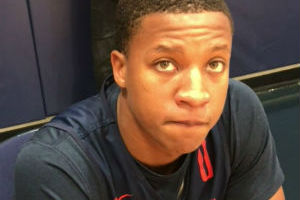 Former UVA guard Devon Hall had seven points on 2-of-7 shooting in 18 minutes for Oklahoma City in a 92-87 Thunder win over Portland in NBA Summer League action on Thursday.

The big news of the night in the NBA involved OKC, which traded star guard Russell Westbrook to Houston for Rockets point guard Chris Paul and a haul of draft picks, continuing the Thunder’s move toward a total rebuild after a third straight early playoff flameout.

Oklahoma City had earlier flipped Paul George to the Los Angeles Clippers for a run of Clips’ draft picks.

It is being speculated that OKC will try to find a new home for Paul, 34, who is on the books for $123 million in salary over the next three years. Miami is among the possible final landing spots for Paul.

What this means for Hall, a 2018 second-round draft pick: as the Thunder goes young, it’s going to need some guys.

Hall split the 2018-2019 season between Australia and the NBA G-League. The 6’5″ guard averaged 9.2 points, 4.4 rebounds and 2.5 assists per game in Australia before joining the Thunder’s G-League affiliate, OKC Blue, where he averaged 7.3 points per game in 10 appearances.