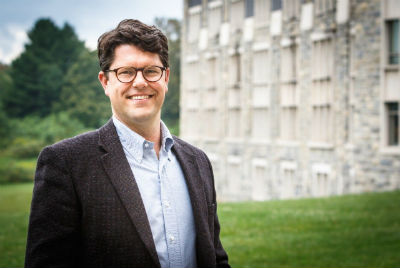 LaDale Winling earned a grant from the National Endowment for Humanities to study the effects of the interstate highway system on displacement and environmental destruction. Photo courtesy Virginia Tech.

On the road to connecting the United States, government officials displaced hundreds of thousands of Americans.

The interstate highway system launched in the 1950s as the most ambitious public works project in the world. Spanning 48,000 miles, the system aimed to connect cities and towns throughout the nation.

While the massive project succeeded in revamping transportation and commerce, its cost cut far deeper than the $125 billion price tag.

Building the interstate highways meant steamrolling through neighborhoods, bulldozing homes, and shredding the fabric of communities. Estimates of displacement range from 330,000 housing units to 1 million residents — mostly in poor and minority neighborhoods.

Currently, no mapping systems exist to pinpoint every community affected by the displacement and environmental destruction.

LaDale Winling, an associate professor of history at Virginia Tech, is determined to change that. And to help him achieve that goal, the National Endowment for Humanities has provided him with a prestigious grant to kickstart a new project, “Connecting the Interstates.”

“The goal is to develop a digital platform that helps us consider the consequences of building the interstate highway system,” said Winling.

The funding, made available through the organization’s Digital Humanities Advancement Grant program, will cover startup costs in a yearlong planning process, including a workshop featuring a dozen other historians. Dumbarton Oaks, a Harvard research institute in Washington, D.C., is partnering with Winling and will host the workshop, set for 2021.

“Connecting the Interstates” will illuminate the damaging effects of the highway system through an interactive map, Winling said. The tool can help community leaders, public officials, journalists, and historians along with the general public understand the system’s impact on a deeper level.

“The story of the interstate highway system is often told triumphantly,” said Winling. “It was an unprecedented stroke of genius politically and a civil engineering feat. But the negative impacts of the system are still felt in communities today. ‘Connecting the Interstates’ will allow communities to consider the historical costs of displacement and use this knowledge in future decision-making.”

A Virginia Tech alumna, Carmen Bolt, will serve in a crucial research role in the project by collecting and organizing documents from all participants. Bolt will also conduct research trips to a National Archives facility.

“I’m thrilled to serve a role in this massive collaboration with scholars across the country,” said Bolt, who earned her master’s and bachelor’s degrees in history, along with a minor in political science. “This is an opportunity for scholars working in urban history, urban planning, and environmental racism to collaborate at the intersection of these historical issues.”

Bolt’s research focuses primarily on urban disaster history. “I look at manifestations of environmental racism or environmental injustice,” she said.

Bolt is a former student of Winling, who continues to serve as her mentor. Now a Ph.D. student at American University, Bolt has worked with Winling in his previous digital projects, including “Mapping Inequality,” a digital platform focused on the history of redlining, and “Mapping Congress,” a database for Congressional election results since 1840.

The “Connecting the Interstates” team will use the planning period to determine the location of necessary documents and how to secure them. Researchers will need to digitize some of the analog artifacts.

Winling said he’s grateful for the National Endowment for Humanities grant as it lays the foundation for the entire project. “If you want to take on the whole interstate system, you need national support,” he said.

Ultimately, Winling envisions “Connecting the Interstates” as an easily accessible tool for communities across the nation.

“In this present moment, we’re reckoning with racial and spatial inequality,” Winling said, “and communities are open to finding ways to remedy past mistakes and to plan more sensitively in the future.”