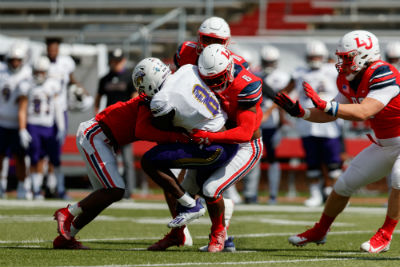 Liberty forced three turnovers and recorded six quarterback sacks, on its way to shutting down North Alabama, 28-7, on Saturday at Williams Stadium.

Chris Ferguson made a successful first start for the Flames (3-0) at quarterback, going 12-for-21 with 64 passing yards and three touchdown passes.

Flames linebacker Anthony Butler had a huge game, with a team-leading nine tackles, two interceptions and one sack.

Joshua Mack rushed for 130 yards on 130 carries, good for his third straight 100-yard rushing game. Johnathan Bennett passed for his first career touchdown, while Flames Brody Brumm and Chris Barrett both hauled in the first touchdown passes of their careers.

UNA went 1-for-3 in the red zone, as two of their possessions stalled inside the 20.

Liberty scored on four out of five times in the red zone.

The Flames outgained the Lions 357-247, with Liberty outrushing North Alabama by a 250-63 margin.

For the season, Liberty is holding opponents to 280.6 total yards offense per contest.