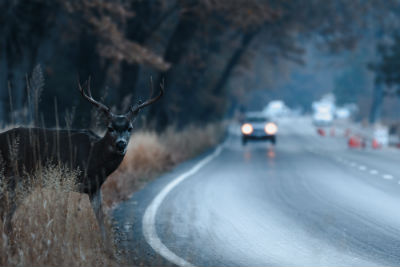 October, November and December are the worst months of the year for motor vehicle collisions with animals due to deer mating season.

AA Mid-Atlantic is warning drivers to be more cautious on the roads. A collision with a deer or other animal can put a serious dent in your vehicle, if not destroy it completely, and could result in serious injuries or fatalities.

According to crash data provided by the Virginia Department of Motor Vehicles, last year more than 5,000 (5,832) crashes involved deer collisions, with the majority of incidents (3,057) happening in the last three months of the year.

“This time of year is when deer are most active and will often dart out without warning,” said Tammy Arnette, Senior Public Affairs Specialist for AAA.  “It is incredibly important for drivers to remain vigilant, alert and distraction free while driving at all times.”

While any animal on the road can be dangerous, according to the Insurance Institute of Highway Safety, there are more than 1.5 million deer-vehicle collisions each year, resulting in 150 human deaths and tens of thousands of injuries. Crashes involving deer can pose great risk to motorists, but even a crash in which no one is injured can be costly. AAA Insurance reports the average deer-related claim in Virginia in 2018 was $3,956.

The National Insurance Crime Bureau (NICB) finds that between 2014 and 2017 there were 1,740,425 animal-related insurance claims processed in the United States with collisions with deer causing the most claims. The actual number of incidents is likely much higher since many drivers do not choose to carry coverage for this type of event. Collision coverage pays for damage to your car resulting from a collision with an object (e.g., a telephone pole, a guard rail, a mailbox), or as a result of flipping over. Comprehensive coverage is for damage to your car covered by disasters “other than collisions,” contacts (in this case, contact/collision with animals) and are paid for under the comprehensive portion of an auto insurance policy.

AAA TIPS to help prevent a crash or to reduce damage from an animal collision:

In the event of a collision with an animal, AAA recommends:

To report a dead deer for removal from Virginia state maintained roads, motorists can call the Virginia Department of Transportation customer service center at 1-800-367-7623 or submit a request online at https://my.vdot.virginia.gov/.