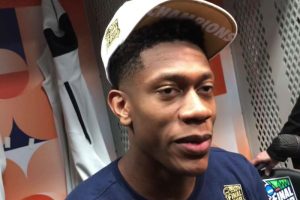 A De’Andre Hunter three brought Atlanta within a point in the final two minutes, but the New York Knicks were able to close out a 113-108 win over the Hawks on Monday.

Hawks point guard Trae Young was assessed for an offensive foul on Atlanta’s next possession, and Julius Randle cleaned up a Rivers miss for a tip-in to push the Knicks’ lead to six.

A dunk by another Duke one-and-done, Cam Reddish, would briefly get Atlanta back to within four, but that was as close as it would get.

Hunter finished with 23 points on 9-of-15 shooting in 37 minutes, adding eight rebounds on the night.