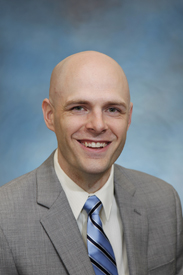 Cory Davies has been named executive director of the RMH Foundation. He will lead the Foundation upon the retirement of Merv Webb, vice president, RMH Foundation, in spring 2013.

Davies joined the RMH Foundation as a development officer in January 2008. Before joining RMH he served as outreach coordinator for the Collins Center in Harrisonburg.

“I am extremely pleased that Cory has accepted this position and will lead our philanthropy efforts into the future,” said RMH President Jim Krauss. “Merv Webb made a tremendous impact on RMH and our community in his 35 years of leadership. We wish Merv all the best and are glad he will be with us for another year during the leadership transition.”

In his role as executive director, Davies will report directly to Krauss.

“I’m both thrilled and flattered to be offered this opportunity,” Davies said. “Philanthropy plays such a critical role in helping to bring RMH’s mission to life, and it’s humbling to be part of such a meaningful process. Merv Webb’s leadership of the Foundation, along with our donors’ longstanding support, have made a tremendous difference in the health care available in our community. I look forward to working with our Board, our staff and our community to continue building on that legacy of compassion and excellence.”

Among his many achievements at RMH, Davies increased the number of gifts received by 23 percent in his first year of employment. He has consistently grown the amount of gifts in the midst of a down economy while reducing fundraising expenses. Davies also resurrected the hospital’s annual phone-a-thon fundraiser, and in his first year of coordinating it increased the number of donations received by 48 percent, the dollar amount of gifts raised by 121 percent, and the number of volunteers engaged in the event by 53 percent.

He is a member and treasurer of the Association of Fundraising Professionals (Shenandoah Valley Chapter), a member and service chair of the Rotary Club of Rockingham County, and a board member of the Harrisonburg-Rockingham Chamber of Commerce.

He and his wife, Donielle, live in Harrisonburg and have two children.

“I’m thrilled that Cory has been appointed to this position,” said Webb. “He loves RMH and has proven himself in the great work he’s already done for the RMH Foundation. The future of the RMH Foundation and the patients we serve will be in good hands.”

Krauss noted that the change in the Foundation leadership title aligns it with what is commonly seen in the industry and frees up the leader of the Foundation from unrelated administrative duties to focus more on fundraising.

“This change in leadership title is reflective of what most healthcare organizations have in place today,” Krauss said. “And as reimbursement pressures mount, it will be increasingly important to assure leadership resources are dedicated to fundraising.”