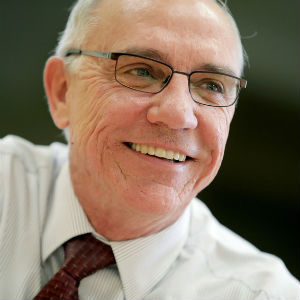 “I am honored to have Cyril join us as the EVP and provost at such a pivotal time in our history,” Sands said. “Under his guidance as interim provost, we have advanced the Commonwealth Cyber Initiative, integrated the Virginia Tech Carilion School of Medicine into Virginia Tech, launched the Calhoun Honors Discovery Program at the Honors College, and contributed to attracting Amazon to Northern Virginia with the higher education package that features the Virginia Tech Innovation Campus. It is leadership like Cyril’s that will allow us to achieve our highest aspirations.”

Sands appointed Clarke to serve as interim executive vice president and provost when Thanassis Rikakis stepped down in November 2017 to take a position as Presidential Fellow for Academic Innovation and executive director of the Calhoun Center for Higher Education Innovation. During his interim appointment, Clarke  focused on advancing the university’s Beyond Boundaries vision and engaging the academic community in foundational initiatives that began under former provost Rikakis’ leadership, such as Destination Areas and the Partnership for an Incentive-Based Budget (PIBB).

Serving as chief academic officer and lead for the institution’s academic enterprise, Clarke will continue to work closely with Sands, college deans, and administrators across the campus to advance cross-disciplinary initiatives; continue to build the institution’s research enterprise; and position Virginia Tech as a 21st-century global land-grant university.

“As interim executive vice president and provost, I have focused on engaging our academic community in advancing President Sands’ Beyond Boundaries vision and the foundational initiatives that are creating comprehensive growth opportunities for Virginia Tech,” Clarke said. “I am honored to be able to continue this collaborative work with faculty and academic leaders in every college and every department and to help Virginia Tech serve the commonwealth as we achieve global distinction. I look forward to leading Virginia Tech’s academic enterprise and partnering with this amazing community of academicians and researchers.”

Clarke’s leadership in veterinary medicine has spanned several professional organizations, including the Board of Directors for the Association of American Veterinary Medical Colleges and past president of the American College of Veterinary Clinical Pharmacology. He is also a past member of the National Agricultural Research, Extension, Education, and Economics Advisory Board and the AVMA Council on Education, the accrediting agency for veterinary medical education in North America.

Before leading Virginia Tech’s academic enterprise as executive vice president and provost, Clarke served as dean of the Virginia-Maryland College of Veterinary Medicine. In that role, he launched a degree in public health, the college’s first undergraduate degree program. The degree is an integral component of the college’s One Health initiative, which recognizes the close linkages between animal health, human health, and the environment, and is reflected in the college’s engagement with the developing health sciences and technology program in Roanoke, in partnership with Carilion Clinic.

“The strength of the provost candidates we invited to campus signaled the academic credibility and reputation of Virginia Tech,” said Rosemary Blieszner, dean of the College of Liberal Arts and Human Sciences, Alumni Distinguished Professor, and chair of the search committee for the executive vice president and provost. “I am thrilled to have my fellow dean and colleague serve as Virginia Tech’s next provost, knowing that Cyril is clearly the best in the country to lead us at this time.”

From his first day as interim provost, Clarke has actively engaged the campus, advancing the university’s vision and foundational initiatives and soliciting ideas and feedback from faculty and staff. He plans to continue this direct communication and partnership with the academic community,  working collaboratively with them to create new opportunities for Virginia Tech throughout the Commonwealth of Virginia.

Going forward, he will focus on listening to the campus community, leveraging ideas, experiences, and expertise to build strategic areas of excellence that are distinctive, relevant, effective, and sustainable.

“I have worked closely with Cyril Clarke through my engagement with the Board of Visitors and my service to the Faculty Senate,” said John Ferris, president of the Faculty Senate and associate professor of mechanical engineering in the College of Engineering. “Cyril brings to the provost position a reflective, deliberate, and inclusive approach that supports the faculty’s stewardship of the university’s academic mission, which will ensure that we are a first choice for the best and the brightest academics in the world. Cyril has been a strong faculty advocate and partner in his interim capacity, and I look forward to continuing to work with him in the years to come.”

Clarke’s leadership extends beyond Virginia Tech’s academic enterprise. As co-chair of the Educational Programs and Experiential Learning working group for the Commonwealth Cyber Initiative (CCI), he helped design a plan to advance talent development across Virginia.

“Virginia Tech is on the move and needs strong academic leadership with the courage and conviction to do what is right for Virginia Tech in its service to the commonwealth,” said Dennis Treacy, rector of the Board of Visitors. “I have seen first-hand these qualities in Cyril over the past year, and I am excited about the strategic leadership partnership of Tim Sands and Cyril Clarke. I am confident that together they will develop new opportunities, make great economic impacts, and move Virginia Tech forward at such an important time in our history.”

Clarke is a respected resource for Virginia Tech’s Board of Visitors, actively engaging them in discussions and strategies for advancing the academic enterprise. In his permanent role, Clarke will continue to be a collaborative partner with the board, serving as a voice and advocate for faculty and staff in academic leadership and programming matters.

“The development of the Academic Health Center and the university’s strategic growth in Roanoke have benefitted greatly from the support and leadership of Cyril Clarke, initially in his role as dean of the college of veterinary medicine, where he contributed to our planning for the new Biomedical Research Addition, and subsequently in his role as interim provost where he served as a strong and effective voice for the originally conceived VTCRI and its recent transformation to the Fralin Biomedical Research Institute at VTC,” said Michael Friedlander, executive director of the Fralin Biomedical Research Institute at VTC and vice president for health sciences and technology.

“With the continuity and vision of leadership from Provost Clarke and President Sands, we are strongly positioned to continue the forward momentum we have created to improve human and animal health through innovative approaches to the prevention, diagnosis, and treatment of disease and to contribute to sustainable economic vitality of the region,” Friedlander said.

With Clarke’s permanent appointment as executive vice present and provost, Virginia Tech will launch a national search to permanently fill the position of dean of the Virginia-Maryland College of Veterinary Medicine, vacated by Clarke in November 2017.

Greg Daniel currently serves as interim dean of the college, and together with its leadership team, has ensured its continued growth and development of programs that place it at the forefront of veterinary medical education.  The college recently announced the most diverse and competitive applicant pool for the DVM program in its history, and construction of a new Comparative Oncology Research Center in Roanoke is underway.