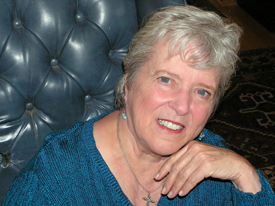 George and Martha Washington were America’s first First Couple. From their beloved Mount Vernon they offered up 18th-century hospitality to statesmen and commoners alike in the manner appropriate for Virginia plantation owners.

On Saturday, Feb. 25, Staunton’s own culinary historian, Nancy Carter Crump, will talk about the new book that she was a part of, Dining with the Washingtons, at the Smith Center in Staunton from 1-3 p.m. The talk and book signing is sponsored by the Smith Center Museum Store. A book signing and food tasting, comprised of two recipes from Dining with the Washintongs and two from her previous book Hearthside Cooking are included in the event.

Dining with the Washingtons, published by the University of North Carolina Press, offers an insightful look at the customs and manners of 18th-century America as seen through the life of the Father (and Mother) of our country. Editor Stephen A. McLeod has sifted through historic accounts, diaries, plantation records, and archaeological evidence to piece together the story of the food, place settings, serving styles, and especially the cooks that prepared the food for the Mount Vernon table. All told, the book paints a personal behind-the-scenes picture of the Washingtons that makes them come alive to the modern reader.

Integral to the success of the book was the work of culinary historian Nancy Carter Crump. Known to historians and museum interpreters as the expert in colonial foodways, she adapted 90 historic recipes appropriate for the Washingtons’ table for use by modern cooks in modern kitchens. Crump, who is also the author of Hearthside Cooking: Early American Southern Cuisine Updated for Today’s Hearth and Cookstove, had to not only know how to convert the recipes for modern measurements and cooking temperatures but also had to find appropriate ingredients to come as close to matching the 18th-century taste and texture as possible. The challenge is not an easy one as nearly every basic ingredient from sugar and flour to leavening agents is vastly changed from that used in the Mount Vernon kitchen. The results are surprisingly varied and flavorful as visitors to the event will note when they taste samples from four historic recipes recipes taken from Crump’s two books.

The event, to be held in the first floor History Gallery of the Smith Center, runs from 1-3 p.m. and is free and open to the public. Crump will offer readings from the book at 1:15 and 2:15. Both the new Washington book and her previous hearthside cooking book will be available for purchase and signing and food tastings from the books’ recipes will be ready for tasting.

Dining with the Washingtons is a  236-page hardcover 10 by 10-inch book lavishly illustrated with color images of Mount Vernon as well as many of the dishes that were served on the Washingtons’ table. In short, it captures the flavor of a time when America was young and the first First Couple was setting a standard for a new nation.