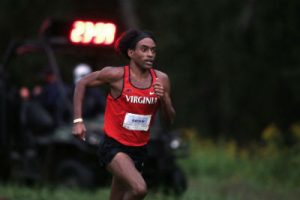 Asfaw was the top runner at the Virginia Invite, the Cavaliers’ season opener against North Carolina and Wake Forest. The senior completed the 8k course in 24:03.1 to capture the top time by eight seconds. He was also recognized by the U.S. Track & Field and Cross Country Coaches Association (USTFCCCA) for his performance, earning National Athlete of the Week honors from the organization. Asfaw was the first UVA cross country runner in program history to earn the national accolade from USTFCCCA.

Porter had a strong start to his collegiate career, capturing the fourth-fastest time at the Virginia Invite. In addition to finishing as the top freshman at the meet, he was the second UVA runner to cross the finish line. Porter ran a time of 24:15.4 to help Virginia open the season with a first-place finish.

Virginia will return to action on Oct. 7 as the team heads to Cary, N.C.