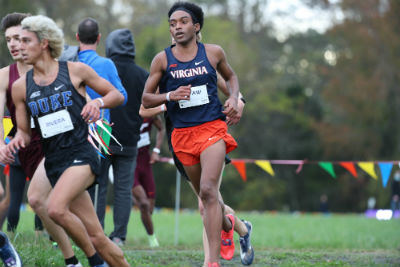 The Virginia men’s cross country team concluded the regular season on Friday with the top score at the Virginia/Panorama Farms Invitational at Panorama Farms in Earlysville.

It was the third team win for the Cavalier men as senior Rohann Asfaw captured his third individual title of the season.

Senior Hannah Moran led the women’s team to a second-place finish as she recorded a career-best time in the women’s race.

In the women’s 5k, the Blue Devils won the competition with 23 points as the Cavaliers finished second with 47 points. Virginia Tech placed third with 58 points.

With a time of 23:52.5, Asfaw captured his third individual win of the season. Asfaw and Duke’s CJ Ambrosio separated from the pack late in the race, but a strong kick down the final stretch propelled the UVA senior ahead to win the race by four seconds. Freshman Wes Porter (Kansas City, Mo.) was the second UVA runner to cross the finish line for the third consecutive meet as he completed the 8k course in a time of 24:10.2 for third place. Graduate student Randy Neish (Glastonbury, Conn.) finished moments later in fourth place with a time of 24:11.6. Sophomore Bryson Crites (Trabuco Canyon, Calif.) placed eighth with a time of 24:19.1, while freshman Kellen Hasle (Purcellville, Va.) placed 10th with a time of 24:23.3. 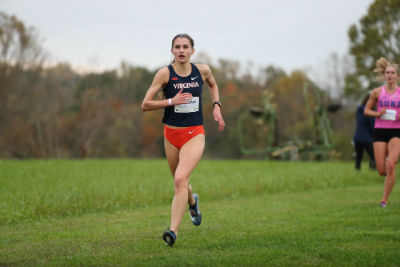 Moran was the top Cavalier in the women’s race, finishing fourth overall with a career-best run of 17:07.1. Seniors Gabriella Karas (Louisville, Ky.) and Kiera Bothwell (Springfield, Va.) also captured career-best runs as they finished sixth and ninth, respectively. Karas recorded a time of 17:12.7, while Bothwell ran a time of 17:26.4. Graduate student Michaela Meyer (Southbury, Conn.) finished 12th with a season-best time of 17:42.0 as redshirt senior Olivia Sargent (Yardley, Pa.) rounded out UVA’s top five with a time of 17:57.5 for 16th place.

Virginia will travel to Cary, N.C., on Oct. 30 to compete at the ACC Championships at the WakeMed Soccer Park.