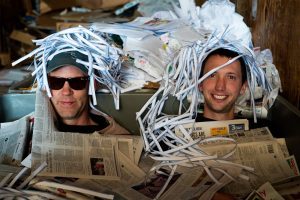 David Brennan (left), recycler, and Matthew Freed, EMU recycling coordinator, are the organizers of EMU’s efforts in the RecycleMania contest. They were good sports and hopped in a newspaper recycling bin to illustrate their love of recyclables.

Eastern Mennonite University has retained its crown as the RecycleMania champion of Virginia. For the fourth straight year, EMU finished first among Virginia colleges and universities entered in the Competition Division (diversion subcategory) of the annual nationwide contest. EMU’s recycling rate of 42.347 percent also placed it 63th nationally out of 170 schools.

EMU recycling coordinator Matthew Freed says the event provides an opportunity to “engage with the campus and community in more creative and enjoyable ways.”

Last year, for the first time, Freed held a waste audit competition in the residence halls to better track “what type and percentage of recyclables, compostables and re-usables were being thrown out.”

The contest’s Grand Champion is Parkwoods, who composted 153.4 pounds of food waste over the contest period. Northlawn was a close second with 67.6 pounds, and Cedarwood tallied bronze with 41.8 pounds. As this year’s prize, ten randomly selected Parkwoods apartments have received a $5 Common Grounds gift certificate.

To learn more about Recyclemania, visit our websiteand their website.

Other reasons to like Recyclemania season besides winning again

For some on campus, the start of the annual spring Recyclemania contest is anticipated, not just for the opportunity to show our recycling chops and “incendiary activism” around consumerism, but also for the random appearance in our inboxes of some of the most startling and cackle-inducing emails of the year (hands-down).

This is thanks to David Brennan, who contributes body if not soul as a recycling crew team member at EMU while laboring as an adjunct faculty member at James Madison University and also at the plying of his craft. Brennan is a regular host of Kairos Place, the writing retreats here at EMU.

This healthy balance has helped to generate his book (not his first) If Beauty Has To Hide, published by spuyten duyvil, in May 2018.

He has been widely published (this is a normal, but lazy phrase used to capture a career’s worth of creative endeavors, so if you want to learn more, click here).

He is an occasional contributor to EMU news coverage, writing about

Editor Lauren Jefferson is a fan, which is why she decided this year’s Recyclemania coverage would start with competition results, but then move, not so subtly, into the alternative and unique angle of how the contest is publicized on campus.

“I have saved several years of RecyleMania emails,” she admits, “and pull a few of them out on a regular basis to remind myself of the worlds of words that my cubicle sits adjacent to. I have on occasion forwarded these emails outside the EMU community to others who would enjoy them.”

Her favorite, she says, is “Recyclemania Week 6: Dream Sequence for the Gamer in All of Us” (March 18, 2016), which starts to report the dreadfully poor numbers for the Hillside waste audit and slips, abruptly, into a Jorge Luis Borges-slash-Ender’s Game-imbued vignette starring a dump-truck-driving dog.

“It is micro- and macro- at once,” Jefferson says. “Recyclemania is, yes, important to our sustainability mission, but also a reminder that the act of re-usage and recycling, even just the simple identification of its potential for transfiguration, can be a portal into another world, or worlds, or the fifth or sixth dimension, or whatever.”

For your reading pleasure

Here’s a sampling of informative emails from the 2018 Recyclemania season.

————————–it’s a RecycleMania email shout out to all you about-to-be spring breakers, midterm takers, snap filter fakers, leaf-pile rakers & compost makers——-that’s right, we got ####’s to report, updates to extort, data to retort.

[This goes on for several more informative stanzas, calling out Maplewood for their pathetic apathy in the general residence-hall-compostables poundage-recordings.]

secondlys, we got the big data descending, rankings to be comprehending, national ####’s we need ascending———in the countrywide scope of contest contestants we’re mildly pleased EMU’s charting 44ths out of 134 totals schools———-respectable but why settle for respect?————————while over in the VA-only ranking we’re crushing it old school, shutting it down like no school, critically representing like New School———–nature first, we’re first in VA, nextly Virginia Polytechnic & State University slotting in at 75ths for VA’s second position, UVA 87ths, JMU 91sts——————holding solid keep the solids in the flow, grow your own dirt grown your own food grow in the know———–yesssss.

I refer, to keep our community communication channels clear, to RecycleMania (henceforth RM).

RM, the annual national campus community recycling collection collaboration, begins this week, and will run within our community and neighboring and non-neighboring campus communities across the next eight (8) Sundays, as well as the days in-between. These Sundays are not Super Sundays (henceforth SS) or Super Bowl Sundays (henceforth SBS), but rather Sundays Upon Which You Might Reflect On Various Manners In Which You Might Better Serve Your Community Of Fellow Humans And Your Community Of Animals And Plants And The Earth Which Every Year Performs A Solar Orbit By Means of Recycling (henceforth SUWYMROVMIWYMBSYCOFHAYCOAAPAATEWEYPASOBMOR).

Community, there are communicable details to attend to. For instance, your EMURCHP would remind you that now is an excellent opportunity to engage in some Intracampus Community Recycling (henceforth ICR)! Unload! Release! Free your mind and the rest will follow! (To quote 1990s R&B group En Vogue (henceforth EV).) Commune with your reusables! Commute to your community recycling stations!

Dorm Communities (henceforth DC), for you we propose a special community challenge: the DC Compost Collusion (henceforth DCCC)! The short: beginning next week, for the next six (6) weeks, your dorm compost will be hefted, weighed and hauled away. At the close of said six (6) weeks, the DC with the highest DCCC weight will win a prize for best display of collective community consciousness. Your EMURCHP can’t stress enough the community benefits of collaborating in the collecting of compost. Every year our LCC composts twenty (20) or more tons, which saves the University (henceforth U) thousands of dollar bills in landfill fees.

So join us as we communally compete with neighboring and non-neighboring campus communities to communicate our commitment to recycling with conviction.