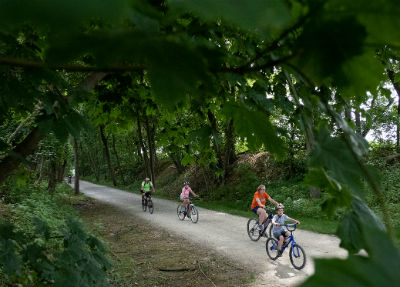 A family bicycles the Warwick-to-Ephrata Rail-Trail in Lancaster County, PA, to get a dose of the outdoors during the coronavirus. (Bay Journal photo by Dave Harp)

Lynne Napoli of Boiling Springs, PA, lives near the Appalachian Trail, which is normally her refuge for quiet mental sustenance.

But, this spring and summer, things are different. “It has been so packed I don’t go,” she explained. “When I do, it is trashed. Other sites have been ridiculously spray-painted. I’m glad people got out, especially children. Unfortunately, not many seemed to respect nature. This makes me so sad.”

Parks, trails and natural areas in Chesapeake Bay states have been slammed this spring and early summer as the masses head outdoors seeking relief from coronavirus stay-at-home orders. The effects have been widespread and varied across Bay states. Hiking, hunting, boating, paddling and fishing have all been affected.

“It’s been unprecedented in every sense of the word,” said Jason Bulluck, director of Virginia’s 64 natural area preserves, where the priority is to protect rare species and unique natural communities and habitat, rather than provide recreation. Three of the preserves had to be closed for overuse. Parking lot gates at others had to be manned seven days a week to control entry into the sensitive areas.

“It’s like summer holiday weekends,” said an exhausted Melissa Baker, Virginia state parks director, who had to lay off 70% of her staff at the peak of the pandemic because of loss of revenue from lodging at cabins and campgrounds.

The swarming has land managers sorting out blessings and curses and wondering how to handle what may be the new norm.

During the surge in attendance, natural resources have been damaged by illegal all-terrain vehicle use, trash dumping, littering, increased spray-paint and other types of vandalism, unauthorized creation of new erosion-prone shortcut trails, blocked boat launches, and trees cut and boulders thrown from landmarks. Park staff has also been taxed by frivolous rescue calls and complaints about worrisome behaviors such as camping and building campfires in illegal places, walking dogs off leashes and a lack of social distancing.

On the positive side, park officials said, untold numbers of people have discovered the physical and mental gifts the outdoors has to offer, and perhaps the ranks of those who will clamor for protecting nature has grown.

Maryland’s 53 state parks had record attendance this spring, reports Maryland Department of Natural Resources spokesman Gregg Bortz. May attendance alone was up by nearly 1 million people over the previous May, an increase of 56%. The states parks, or parts of them, were closed because of overcrowding 65 times through June 12. State parks with the most frequent closures include Patapsco Valley, North Point, Sandy Point, Calvert Cliffs, Greenbrier, Cunningham Falls and Assateague.

Maryland hunters took a record number of wild turkeys this spring, at least partly attributable to hunters having more time to take to the woods.

Virginia state parks got such heavy use that maintenance projects were dropped and staff were reassigned to manage overflowing parking lots. Others worked to ensure proper social distancing and group sizes on trails.

“It’s not just more people, it’s different people, who are not familiar with [the ethic of] ‘leave no trace,’ ” Bulluck said.

In Pennsylvania, fishing licenses were up 20% this spring. Permits were up 50% for launching kayaks, canoes and paddleboards at Pennsylvania Fish and Boat Commission ramps.

“Every day is like a weekend day now,” said John Wengert of the Lebanon Valley Rail-Trail.

The rise in outdoor activity has not been entirely good for Pennsylvania’s natural resources, either. Between March 1 through May 20, the Pennsylvania Game Commission issued 248 citations to people illegally driving all-terrain vehicles on state game lands, almost three times as many as the same period a year ago.

According to the Pennsylvania Environmental Council, use of 67 trails, parks and natural areas around the state spiked as much as 200% during March and April over the same period in 2019. And the Pennsylvania Parks & Forests Foundation said the average increase in state parks and state forests was up 29% in March, even without public programs, camping, open restrooms and volunteer activities.

Because of the coronavirus, the Game Commission did not monitor populations of peregrine falcons in the state this spring. All four rattlesnake roundups in Pennsylvania canceled their June events. Trout season had a surprise early opening, to keep anglers from crowding each other. And bass fishing tournaments are being postponed.

Despite all of the strains and abuses on the environment during the pandemic, land managers in Bay states see a silver lining, hoping that the increased use of the outdoors will attract more volunteers, donors and advocates for nature. Studies have consistently shown that being outdoors improves mental, as well as physical, health.

“The good news is that I believe that it reconnected people to these areas and helped people stay safe and healthy, and to de-stress,” said Marci Mowery, president of the Pennsylvania Parks and Forests Foundation. “I also believe that for those reconnecting to the outdoors or new to the outdoors, that we will continue to see them visiting our parks and forests.

“We have had many visitors who have not been to parks before,” reflected Virginia state parks’ Baker. “I do think we’re going to see a whole new group of people that realizes that these resources are their resources, and as they learn about ways to care about the resource, my hope is that the constituency for what we provide and the people that we can reach grows from this.”

Ad Crable is a Bay Journal staff writer based in Pennsylvania. He can be reached at 717-341-7270 or acrable@bayjournal.com. This story was originally published in the Bay Journal and was provided by the Bay Journal News Service