Corpse flower, which blooms once every five years, is about to bloom in Blacksburg 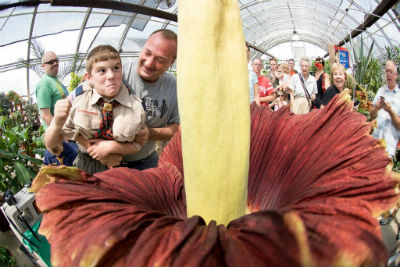 Stinky Phil brought out hundreds of people to smell his stench when he bloomed five years ago. Photo courtesy Virginia Tech.

There is a putrid odor that is a combination of manure, spoiled meat, old gym socks – anything and everything that has a foul odor, really – wafting around a Virginia Tech greenhouse.

This can mean only one thing.

Stinky Phil is back.

Stinky Phil, the name of the beloved corpse flower in the College of Agriculture and Life Sciences, is a rarity in the wild and only found in botanical gardens and greenhouses outside of Sumatra, Indonesia, rainforests. What is just as rare, though, is how often the plant blooms – usually only every five to seven years.

When Phil does bloom, he is a spectacle of the grandeur of the highest order – from the stench to the height of his flower, which can reach 7 to 10 feet tall.

Stinky Phil has been at Virginia Tech since the late 1990s, and this will be his fifth bloom since arriving in Blacksburg.

On April 22 of this year Jeff Burr, greenhouse manager in the School of Plant and Environment Sciences, noticed the plant emerging from the soil. Under typical weather conditions, Stinky Phil would already have bloomed, but extended cold and rain in May elongated the cycle.

The plant waited, on a pause of sorts, but once it started growing, it grew quickly at a rate of about 3 inches each day.

“The excitement and buzz surrounding a bloom are immense,” Burr said. “Not all blooms are equal – some smell a lot stronger than others. In 2015, you had to get right up to it and take a whiff, but once you did, it gagged you. I’m looking forward to seeing – and smelling – this bloom.”

Visiting mother holds her daughter up for a whiff of the corpse flower at the CALS greenhouse on Saturday, August 29, 2015.

The 2013 bloom was particularly putrid, caused by the burning of the stored carbohydrates. As the flower burns the carbohydrates, it short-circuits itself and burns the stored energy in overdrive. As the plant does this, it volatilizes sulfur compounds, which smell similar to rotting meat, attracting flies and beetles. Once the plant reaches the smelly, flowering stages, it lasts only for about 24 hours before it goes back into the ground.

Everything about Amorphophallus titanium is different. During the corpse plant’s life, it’s in one of three phases: asleep below the ground, energy gathering, or the propagation.

When the plant enters the leaf phase, it grows from the underground corm, an underground plant stem that stores the plant’s vitals. As it rapidly grows, the leaf, which looks similar to a palm tree, reaches heights of up to 18 feet while it gathers energy for about six months before going back into the ground. It repeats this process cyclically.

Once the plant has enough energy, it will emerge from the ground and begin the flowering phase. Until the plant reaches a certain height, it’s difficult to tell if it will be a leaf or flower phase.

In all, the time it takes for the corpse flower to grow, flower, and become a corm again is around 30 days.

“The interesting thing about the plant is it’s strange. You don’t have to be a plant person to be interested in the unusual,” said Burr. “It’s a Little Shop of Horrors.”