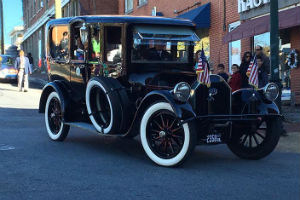 STAUNTON — At 2 p.m. on Wednesday, a parade of vehicles from the local Veterans of Foreign Wars, American Legion, and U.S. Army and U.S. Air Force recruiters and vintage military vehicles will ride around Gypsy Hill Park, through downtown Staunton, and then by assisted living facilities in honor of Veterans Day.

President Woodrow Wilson’s Pierce-Arrow will make an appearance in the parade as it goes through downtown.

“The response of the community has been great,” said Melissa Patrick, commander of District 11 of Veterans of Foreign Wars. “Staunton is a closely knitted community.”

Patrick said that she began planning the parade about two weeks ago after she heard that the city of Staunton’s annual downtown Veterans Day parade was cancelled because of the pandemic.

“There wasn’t anything to replace [the traditional parade], and I thought: ‘That’s too bad,’” Patrick, who served in the U.S. Army from 1978 to 2006 and retired as a Colonel, said.

Patrick said that it occurred to her a lot of veterans in Staunton have been shut in during the pandemic.

“So, I thought: ‘How about we put together a parade and we take it to the different facilities?’” Patrick said.

She contacted staff at nursing homes and assisted living facilities in the Queen City, where an estimated 115 veterans live.

“They were all very supportive. They wanted that for their veterans,” Patrick said.

Then she also got the idea that while the parade drove around Staunton, why not deliver cards and posters to the veterans also?

A box at Staunton Public Library will collect cards and posters for veterans until Tuesday evening. So far, Patrick said 150 cards have been collected.

“I think that it would be nice if each veteran got more than one card,” Patrick said.

Cards for non-veteran residents of the assisted living facilities along the parade’s route are also welcome in the box.

Patrick will ride in the lead car, a VFW vehicle provided by Virginia headquarters, in Wednesday’s parade with the cards, as well as candy to be donated to some facilities.

Participants in the parade will flash lights and wave U.S. flags while an iHeartRadio sound truck plays patriotic music.

“I think it’s to have a nice parade for our local veterans,” Patrick said of her goal for Wednesday afternoon. “But also to enable the veterans who are in those facilities to be recognized and honored and celebrated.”