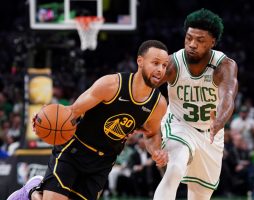 On Monday, the NBA Finals continues; free NBA player props today and best prop bets for the 2022 NBA Finals Game 5 for the Celtics vs Warriors are here. The tip-off time for Game 5 is 9 p.m. ET. The NBA Finals airs live on ABC.

Leading into Game 5 of the 2022 NBA Finals, our betting analysts at Augusta Free Press have picked the best prop bets for the Celtics vs Warriors rematch. Will the Celtics reach 20 points first in Game 5 at Chase Center? Can Stephen Curry score at least 31 points on his home court?

Moreover, will Marcus Smart finish with a minimum of six assists in Game 5 tonight? Read the predictions below. Additional NBA player props today, Game 5 props, predictions, odds and betting picks for the 2022 NBA Finals are on the main page.

In Game 1 of the 2022 NBA Finals, the Celtics defeated the Warriors 120-108 at Chase Center. Stephen Curry sank a 3-pointer at the 5:55 mark of the first quarter, which pushed his team to 20 points first. Then, in Game 2, Celtics guard Jaylen Brown nailed a 3-pointer with 4:25 remaining in the opening quarter. Brown’s shot gave Boston a 22-13 score over Golden State.

Next, in Game 3, Al Horford’s shot at the 5:17 mark of the first quarter put the score at 20-9 Celtics. As for Game 4, Stephen Curry made a shot from downtown with 2:48 left of the opening quarter. Curry’s 3-pointer gave the Warriors a 20-18 lead over the Celtics.

Next, Warriors guard Stephen Curry is averaging 27.6 points per game this postseason. Thus far, Curry has scored at least 29 points each game against the Celtics in the 2022 NBA Finals. In Game 1 of this series, Curry finished with 34 points at Chase Center. Then, the eight-time All-Star put up 29 points on his home court in Game 2.

As for Game 3, he scored 31 points at TD Garden. Lastly, the 13-year veteran generated 43 points in Game 4 on Friday night. For the over, the guard has to score at least 31 points at Chase Center in Game 5. While bettors are not anticipating another 40-point performance from Steph, his statistics this series favor the over. Contemplate taking this bet.

Bet Over for Stephen Curry’s Point Total -124 at BetOnline

Smart has not accumulated at least six assists since Game 3 of the Eastern Conference Finals. Based on the evidence posted here, it’s probably for the best to take the under. Golden State is the perfect opponent for Boston. Both teams have played great defensively. Other 2022 NBA Finals Game 5 props and NBA player props today for the Celtics vs Warriors are on the main page.

James is a dedicated sports betting writer. He earned his bachelor's degree in English and Creative Writing at Southern New Hampshire University. His favorite teams are the Boston Celtics and New England Patriots.

View all posts by Jamesfoglio