how to bet on stanley cup 2022 ontario sports betting sites

How to Bet on Stanley Cup 2022 | Ontario Sports Betting Sites

Ontario sports betting has become easier now than ever before with single-game wagering recently becoming legalized in the province of Ontario. In this article, we’ll show residents how to bet on Stanley Cup 2022 in Ontario and claim free bets ahead of the Stanley Cup Finals. 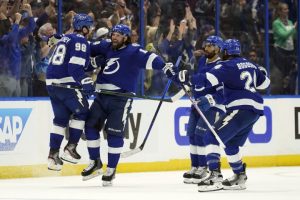 The Stanley Cup is on the line as the Colorado Avalanche take on the Tampa Bay Lightning in the 2022 Stanley Cup Finals, with puck drop for game one going off just after 8 PM ET on Wednesday, June 15th from the Ball Arena in Denver, Colorado.

The Lightning come in as the two-time defending Stanley Cup champions and will look to become the first team since the 1982 New York Islanders to win the Stanley Cup three straight years. As for Colorado, the Avalanche have won two Stanley Cups in their franchise’s history and make their first appearance in the Stanley Cup finals since winning the cup back in 2001. The Avalanche are the betting favorites to defeat the Lightning and hold home-ice advantage which is pivotal in what should be an action-packed seven-game series.

How to Bet on the Stanley Cup Finals in Ontario

The Tampa Bay Lightning finished the regular season in third place in the Atlantic division with 110 points and a 52-23-8 record. The Lightning opened the playoffs as underdogs in their first-round series against the Toronto Maple Leafs but managed to defeat the Leafs in seven games with back-to-back wins in the last two games of the series.

The Lightning join the (76-80) Montreal Canadiens and the (80-84) New York Islanders as becoming just the third team in NHL history to have won seven or more straight playoff series. With this year’s Stanley Cup finals appearance, the Lightning becomes the first team since the (83-85) Edmonton Oilers to advance to the Stanley Cup finals in three consecutive seasons and will look to become the first team to win three straight Stanley Cups since the New York Islanders did it in 1982.

As for Colorado, the Avalanche finished the season with the best record in the NHL’s Western Conference, finishing the year with 119 points and a 56-19-7 regular-season record. The Avalanche opened their playoff run as the +325 betting favorites to win the Stanley Cup, and have held up to their expectations across each series in the lead-up to this year’s Stanley Cup finals.

Colorado comes in as the betting favorites to win their third Stanley Cup in franchise history, having won the cup in each of their last two appearances.

For full betting odds on the 2022 Stanley Cup Finals via BetOnline, check out the table below.

Ontario sports betting fans can bet on the Tampa Bay Lightning or Colorado Avalanche in a number of different NHL betting markets. If you’re brand new to NHL betting in Ontario or don’t know much about hockey in general, don’t sweat, we’ve got you covered.

Scroll down to find out the top Ontario sportsbooks available for the 2022 Stanley Cup Finals.

The Tampa Bay Lightning come in as the betting underdogs in yet another series in this year’s Stanley Cup Finals. The Lightning opened up the playoffs as betting underdogs against the Toronto Maple Leafs, and followed up that series win with another upset in the second round over the President Trophy-winning Florida Panthers in four straight games. The Lightning were the betting favorites heading into their Eastern Conference Finals series against the New York Rangers, but quickly became underdogs after going down 0-2 in the series. The Lightning stormed back with four straight wins, and set themselves up for a three-peat as Stanley Cup Champions if they can pull off another upset over the much less battle-tested Colorado Avalanche.

This is the first Stanley Cup appearance for the Avs in 21 years, and although this team has performed remarkably against their expectations this post-season, the Stanley Cup finals are a whole different animal. The Lightning have faced adversity on numerous occasions in this year’s playoff run, while the Avalanche have yet to trail in any series in these playoffs so far. With the experience edge going to the Tampa Bay Lightning, they are a great bet to win the 2022 Stanley Cup Finals.

Click below to bet on Stanley Cup 2022 in Ontario for free by claiming free bets from BetOnline.

View all posts by Alexmac

Calvaria’s final presale phase is just days away so buy RIA at its cheapest price today!

Virginia got out to an early 11-2 lead, went up 19 early in the second quarter, and cruised from there to an 89-68 win at Penn State on Wednesday in the ACC/Big Ten Challenge.

Podcast: Are you looking forward to college football’s Championship Saturday?

The Mark Moses Show is joined by Mark’s good friend, Chris Graham, editor of Augusta Free Press, to preview Championship Saturday coming up this weekend in the world of college football.

Drake Maye named ACC Football Player of the Year: That, and a glaring omission