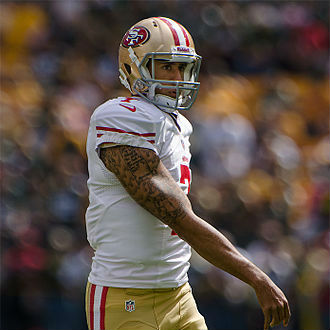 San Francisco 49ers quarterback Colin Kaepernick has refused to stand during the playing of The Star Spangled Banner, traditionally played before most football games.

Like Gabby Douglas’ “refusal” to put her hand over her heart during the playing of the United States’ national anthem at the 2016 Summer Olympics in Rio last month, Kaepernick’s actions have angered patriotic Americans on both sides of the no man’s land that stands in for electoral politics here.

The similarities between America’s response to Douglas, who later said she neglected to put her hand over her heart in the heat of the moment, and Kaepernick, who has decided purposely not to stand, are striking. There is next to no nuance in the discussion around our national anthem and who has to stand at attention during its performance.

But to be clear, Kaepernick does mean it; he is not going to stand for the national anthem until the grievances he has – and shares with millions of men and women around the country – are redressed.

“Ultimately, it’s to bring awareness and make people, you know, realize what’s really going on in this country,” Kaepernick said in a locker room press conferenceMonday. “There are a lot of things that are going on that are unjust, that people aren’t being held accountable for, and that’s something that needs to change.”

Philadelphia Eagles linebacker Myke Tavarres will be joining Kaepernick in his silent protest.

Kaepernick’s critics now range from those who take umbrage at his perceived slights toward the US military to those, like former congressperson Joe Walsh, who question Kaepernick’s very “Americanness.”

Walsh, a talk radio host and Donald Trump supporter, tweeted Monday, “Are we certain that those tattoos all over #MuhammadKaepernick’s body are Bible verses? Or from the Koran?”

Kaepernick’s protest, and the ensuing nationalist backlash from liberals and conservatives alike, is the latest in a long and storied history of athletes performing politics outside of acceptable boundaries.

He currently stands among sporting greats like baseball legend Jackie Robinson, who refused to stand and sing the anthem at the 1947 World Series; Muhammad Ali, who refused to fight in Vietnam; and John Carlos and Tommie Smith, track athletes who performed the Black Panther salute at the 1968 Olympics instead of holding their hands over their hearts.

They have called for his team and the NFL to sanction him for his actions, effectively eliminating an individual’s freedom of speech in defense of the status quo – one that is killing his friends and neighbors, including those who served in the military.

Luckily, Kaepernick’s family, teammates, coaches and the head of the NFL Players Association are all on his side.

It’s time for us to join him. It’s time to have a frank discussion about poisonous nationalism, police who kill black men and women and and face next to no repercussions for it, and why we reify the military regardless of their own actions or requests or how the state uses them.

It’s time to sit in defiance, with clear eyes and full hearts, rather than continue to stand blindly in support of a toxic system.