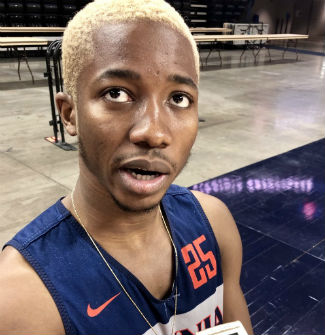 Two weeks before making arguably the most important shot in Virginia basketball history and helping clinch the program’s first Final Four berth since 1984, Mamadi Diakite was playing some of his worst basketball at the most critical of junctures.

Virginia had just been eliminated from the ACC Tournament with an underwhelming 69-59 loss to Florida State. Diakite had played 13 minutes in that game and just seven in the one before, a come-from-behind win over NC State. He had committed as many fouls — five — as he had scored points in those 20 minutes. Dubbed the “X factor” for his team by head coach Tony Bennett at the beginning of the season, Diakite was struggling at the end as Virginia looked forward to the NCAA Tournament.

So he decided something had to change. At that moment, days before the opening round of the NCAA Tournament, his team needed him more than ever. He didn’t need to change how he practiced or prepared. He had to alter his mindset and convince his coach that he was ready to play his best.

Diakite requested a one-on-one meeting with Bennett. Usually a man of few words in front of the media, the Guinean forward needed this conversation more than ever.

“He said, ‘Coach … I’m ready,’” Bennett said Monday. “He said, ‘That wasn’t my best. I wasn’t quite where I wanted to be or right in that ACC Tournament.’

“And he said, ‘I desperately want to do anything — absolutely anything I can — to make this team advance. I know what last year was. This is what I’m so committed to.’”

Perhaps Diakite simply needed to reassure his coach and, in the process, reassure himself. Whatever the case, it worked immediately. Against Gardner-Webb, Virginia dug itself into a 14-point hole in the first half and needed to turn things around quickly. Diakite was a massive part of the Cavaliers eventually coasting to victory. He posted 17 points — second-most on the team — and nine rebounds, then a career high. Quite simply, he dominated the undersized Runnin’ Bulldogs.

“He stayed with it,” Bennett said, complimenting Diakite’s maturity. “Sometimes if guys get off to a hard start, it’s hard for them to get out of that, and, boy … he really responded.”

Bennett wasn’t the only one who praised the big man’s performance.

“What I was most proud of Mamadi for, he did something today, and I don’t know he could have done it at the beginning of the year,” point guard Ty Jerome said after the win. “He came out and had a shaky start, and the way he responded was huge for us. We needed every bit of it, and that’s something he definitely couldn’t do last year, and that’s just a testament to his growth as a person.”

The theme Jerome hit on — year-to-year growth — has been a critical one in Virginia’s success this season. Diakite has posted career highs in points, rebounds and minutes per game while decreasing his foul rate. On several occasions this season, his offensive abilities carried the Cavaliers when other key players struggled.

“His talent and his ability were important [heading into the season],” Bennett said. “And he has improved. He’s newer to the game because of when he started playing. He’s matured. He’s had a really good season … And I think that was the key to our success.”

Diakite didn’t stop after the first win, though. He posted 14 points and tied his newly set career high with nine rebounds in the win over Oklahoma, helping the Cavaliers overcome frigid outside shooting. Against Oregon in the Sweet 16, Diakite set another new career high with 11 boards against a long, athletic Ducks team.

“I thought Mamadi’s rebounding was significant in that game,” Bennett said following the win. “We needed that.”

While Diakite’s game-tying shot at the buzzer was far and away the most memorable moment of the Elite Eight win over Purdue, his overall body of work — 14 points, seven rebounds, four blocks and just two fouls in a career-high 42 minutes — was exactly what Virginia needed. Purdue’s 7-foot-3 center, Matt Haarms, had just three rebounds.

And as for that miraculous shot? Two weeks after a conversation helped turn his and his team’s season around, Diakite was essentially speechless.

“I don’t know,” Diakite said Saturday night. “It happened. I was the person who was designed to take it. And I don’t know. I took it, and it went in. I was happy and ready for the next five minutes. I don’t know how to talk about it. It was just unbelievable.”

Of course, making the Final Four isn’t the end goal. Virginia wants more, and Diakite will be an important part of that come Saturday night in Minneapolis against Auburn. It’s marks roughly three weeks since Virginia lost to Florida State. Thanks to a conversation with his head coach during one of the lowest points of his season, Diakite is now positioned to help Virginia finish on the highest of highs.