Coach Dex and the Zen of Kicking 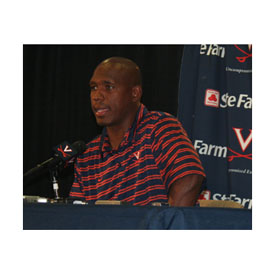 “My philosophy is just to get them to play hard, play fast. To me, football is a simple game. Run, tackle, catch. On special teams, if we’re returning it, block the guy and try to get our guy to return it. If we’re kicking it off, tackle the guy. Bottom line, to me,” said Anthony Poindexter, the new special-teams coordinator at the University of Virginia and the only holdover on the staff of Mike London from the Al Groh era.

Poindexter was an All-America at safety at UVa. in the 1990s. Those were the good years, and they look better the further down the road we get from the end of the George Welsh era, when fans got so complacent with the run of seasons with at least seven wins that Welsh was essentially run out of town because he didn’t do more.

“The last two years have been hard for me personally as an alum, then as a coach and former player. It’s tough seeing our program at the state it had gotten to. So it’s very important to me to get our program back to being the number-one program in the state and competing every year for the title and going to bowl games every year,” Poindexter said.

Poindexter’s role is coordinating the efforts of the third of the game that fans tend to overlook. Poindexter and London are of the same mindset with their approach to special-teams play.

“I’m going to use the best players. I don’t look it as a feel-good, that’s the way people get on the field, get into the game. You can win and lose games on special teams. And me and Coach London are on the same page with that. We’ll use whoever we have to use to perform well on the special teams,” Poindexter said.

The headline comes from a line of questions from reporters at UVa. football media day on Wednesday on one facet of special teams that one can assume the former defensive back has little personal expertise with – kicking.

Take his answer to a query on his approach to working with kickers.

“Teaching the kicker? Try to get the best one I can, that know how to kick when they get here,” he said.

“I think with these kickers, a lot of it is mental. They’ve got all these guys they go to in the summertime. All my guys were out at this specialist, that specialist. I’m not a specialist. They go and learn the techniques and work on their techniques with these guys. I just want to give them an atmosphere where they feel comfortable that we ain’t going to be jumping down their throat if they miss one. They’re human, too, but obviously at the end of the day, they’ve got to make kicks, make punts, that kind of stuff, but we’ve got to give them a comfortable environment so they can succeed,” Poindexter said.

“They’ve just got to learn to relax and do their thing. I mean, that’s all these guys do, is kick. I’m like, just do what you do. You’re over there all day practicing your kicks and all that kind of stuff. When you move to the team part of it, it’s the same thing. Just relax, ain’t nobody out there, it’s just you and the ball.”

Your moment of Zen.