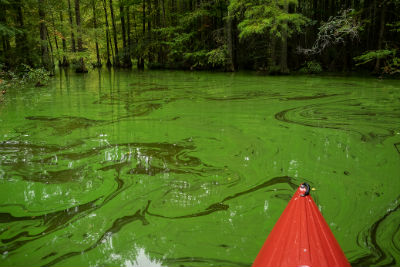 The nutrients nitrogen and phosphorus cause algae blooms that cloud the water. A gradually increasing trend in rainfall is driving more nutrient pollution off the land and into streams. (Bay Journal photo by Dave Harp)

It’s long been known that climate change would make the job of cleaning up the Chesapeake Bay more difficult.

To be precise, it will be about 10% more difficult between now and 2025 than previously thought, at least according to new computer modeling. And the region’s changing climate will continue to make things harder after that.

The findings were presented at several recent meetings of the Chesapeake Bay Program, the state-federal partnership leading the Bay restoration effort, which is expected to approve the figures by the end of the year.

After that, states will have to start figuring out how to reduce the additional climate-driven nitrogen pollution — coming in at about 5 million pounds per year — on top of the reductions they are already struggling to achieve.

That’s because climate change was not factored into the latest Bay cleanup goals, established in 2010. At the time, there was not enough information to quantify its impact.

Since then, more research and analysis has shown that climate change has actually been impacting the Bay for decades, primarily because of a gradually increasing trend in rainfall that drives more nutrient pollution off the land and into streams and, ultimately, the Bay.

Those nutrients, nitrogen and phosphorus, cause algae blooms that cloud the water, blocking sunlight from underwater grass beds that are important habitat for fish, crabs and waterfowl.

When the algae sink to the bottom and die, they decompose in a process that draws oxygen out of the water, leading to summertime dead zones in deep areas of the Bay.

But the changing climate complicates the picture. The computer models used by the Bay Program to set the 2010 nutrient reduction goals relied on weather data from the mid-1990s to represent a “normal” range of weather conditions.

It turns out that much has changed since then. The Bay region is getting wetter on average, and more rain drives more nutrients from farms and lawns into the water. The Bay is changing as well. Warmer water temperatures can spur more algae growth, which reduces oxygen in the water and triggers the summertime dead zone.

Those changes, in effect, have been gradually offsetting the impact of nutrient reduction efforts since about 1995, but that change was not previously accounted for in models. When that is factored in, the new modeling shows that, by 2025, the Bay region will need to reduce more nitrogen than expected — 5 million pounds a year — to attain the same water quality goals.

Put another way, the Bay region previously needed to reduce the amount of nitrogen entering the Bay in an average year from about 251 million pounds now to 201 million pounds a year by 2025.

Nitrogen is the nutrient that has been the most difficult to control — and the most problematic for the Bay. The region was not on pace to meet its nitrogen goals even without the added burden of climate change.

The good news is that, after making new data and model changes recommended by scientists, the newest estimate for annual climate-related pollution reductions is less than the 9 million pounds originally estimated in 2017.

But the new modeling raises a number of red flags about the future. The rate of climate change impacts on the Bay is accelerating. In the 10 years from 2025 and 2035, states will have to offset another 5 million pounds of nitrogen a year to keep pace with changing conditions.

“That means we will have as much of an impact from climate change in the next 10 years as we had in the past 30,” said James Martin, Bay coordinator for the Virginia Department of Environmental Quality and co-chair of the Bay Program’s Water Quality Goal Implementation Team. “That’s scary.”

But additional work may be needed to address two other potential climate impacts that could affect that equation:

• Preliminary modeling shows that climate change may have a greater impact on shallow areas and surface waters than previously realized. Historically, the Bay’s nutrient reduction goals have largely been aimed at eliminating the deep-water dead zone. But as water warms on the surface, it will hold less oxygen, so surface waters may not meet water quality goals either. Scientists want to further revise the models to better assess that impact, but it could mean even more nutrient reductions are needed in the future.

• Climate change may reduce the effectiveness of on-the-ground actions to reduce nutrient runoff. For example, increased rainfall associated with climate change may overwhelm stormwater control ponds or vegetated streamside buffers, reducing their effectiveness. Those impacts are not accounted for in cleanup plans.

Those things have not been calculated yet, said Martin of Virginia’s DEQ.

“I think it’s reasonable to say, once we do account for that, it’s going to make things harder.”

Beth McGee, director of science and agricultural policy at the Chesapeake Bay Foundation, said she was pleased the Bay Program is requiring detailed plans from states for dealing with climate impacts anticipated by 2025. But she said she wished it would ask for more than a general description about what they would do by 2035.

“If we had our preference, we would have had numbers, not just sort of a qualitative narrative about 2035,” McGee said. “That said, we’re happy that they’ve at least taken on 2025.”