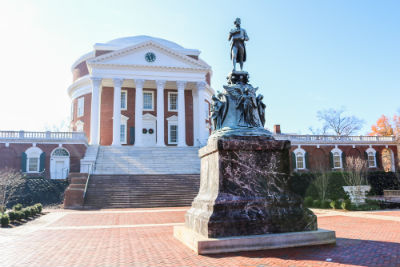 NFL stars Deshaun Watson and DeAndre Hopkins are, rightly, raising issue with their alma mater, Clemson, continuing to honor the name of a prominent pro-slavery politician.

I can’t write about this without addressing the issue with my own alma mater, the University of Virginia.

The issues are more closely related than you’d think. UVA alums know that Thomas Jefferson was the driving force behind literally everything at our school, that he owned slaves, that he fathered children by one of his slaves.

John C. Calhoun is a similar towering presence at Clemson.

The school is built on his former plantation, where, according to his bio on the school’s website, he owned 70-80 slaves.

Calhoun is also close to being an equal to Jefferson as a political force. The seventh vice president of the United States, serving in that role from 1825-1832, Calhoun was also a United States senator and Secretary of State who was a leading defender of the institution of slavery for more than 40 years.

His name is still on the honors college at Clemson, and Hopkins, now with the Arizona Cardinals, has joined an effort of students, faculty and alums seeking to rename the school.

“I felt this oppressive figure during my time at Clemson and purposely do not mention the University’s name before NFL games because of it,” Hopkins wrote on Instagram. “I am joining the voices of the students and faculty who have restarted this petition to rename the Calhoun Honors College. I urge all Clemson students, football players, and alumni to join us, so the next generation of young Black leaders can be proud of the institution they graduate from. Now is the time for change.”

Watson is also on board with the effort.

“Clemson University should not honor slave owner John C. Calhoun in any way,” Watson tweeted Monday. “His name should be removed from all University property and programming. I am joining the students, faculty & DeAndre to restart this petition to rename the Calhoun Honors College.”

I can’t imagine being a young African-American wanting to better myself with a college education and having to reconcile doing so on grounds that honor a man who asserted that slavery was a “positive good.”

Which gets us to Jefferson.

He’s known for writing that “all men are created equal,” yet he owned more than 600 slaves over the course of his life, and the wealth that created his famed Monticello and allowed him to devote his considerable energies to politics and eventually the founding of the University of Virginia came from the exploitation of slave labor.

The hallowed Grounds that we hold in reverence was built with slaves rented from local landowners working alongside whites and free blacks, and slave labor was utilized on Grounds all the way to the end of the Civil War in 1865.

I fully back the effort of Watson and Hopkins to bring attention to change at Clemson with respect to Calhoun.

It’s probably time for us to take a similar hard look at our own legacy at UVA with Jefferson.