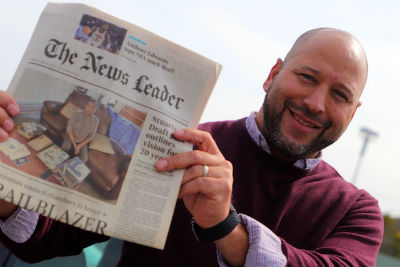 Wilson was the first African-American woman elected to council in the city’s history.

Tony Davenport, Rita Wilson’s grandson, will be one of those in attendance.

“For her name to adorn the chambers where the city governs and makes such important decisions is incredible,” Davenport said. “She gave her heart and soul to the city of Staunton and to see the city remember her contributions and honor her in such a way is remarkable. I love that the children from Staunton can see where she came from to where she ended. It’s a wonderful legacy.”

Through a scholarship named in her honor, Wilson’s legacy continues to impact lives presently.

Wilson’s entire life has been devoted to service. She served on the city council for 16 years from 1992 to 2008, and she also found service opportunities with The Staunton Rotary Club, Shenandoah Kiwanis, NAACP, the Staunton Senior Center, the Staunton-Augusta Family YMCA board of directors, the Staunton School Boar d and Frontier Culture Museum’s Board of Directors.

After Wilson’s death, The Community Foundation of the Blue Ridge created the Rita S. Wilson Memorial Scholarship in her honor.

According to the website, “The Rita S. Wilson Memorial Scholarship will support residents of Staunton and Augusta seeking to continue their education.”

Wilson’s life was marked by a continued passion for growth and learning, so the scholarship bearing her name isn’t limited to high school seniors either.

The website says “the scholarship will be made available to adults in the workforce, who, like Rita, chose to pursue higher levels of education.”

Makeba Robinson was the first recipient of the Rita S. Wilson Memorial Scholarship. Fittingly, she instructed one of Wilson’s great-grandchildren as a student.

“I can’t describe the feelings I felt when I walked into the middle school classroom with my son, and his teacher was Miss Robinson,” Davenport said. “It was a tangible display of just what this scholarship means and what can be achieved.”

Davenport hopes as people reflect on the life of his grandmother, they will consider supporting the scholarship financially.

“I implore people that as we dedicate the city council chambers in her honor to give to the scholarship fund to honor her passion to motivate, educate and to serve,” Davenport said.

A link to the scholarship fund can be found below: