What do we mean by ‘defund the police’? 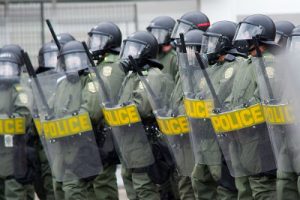 The “defund the police” movement isn’t actually about “defunding” the “police.” This I’ve been gleaning from several op-eds out over the past few days explaining what “defund the police” really means, which, we’re told, means actually shifting some funds from law enforcement to use in other areas, like mental health, substance abuse prevention, affordable housing.

And, hey, good ideas, those, independent of shifting, defunding, however you want to frame it.

Putting it this way means we’re not supposed to quibble with the actual definition of “defund,” which according to Dictionary.com means “to withdraw financial support from, especially as an instrument of legislative control.”

Or Cambridge.com: “to stop providing the money to pay for something.”

Or CollinsDictionary.com: “to stop providing funds, especially government funds, for.”

These definitions of “defund” are, coincidentally, in line with what we’re hearing from city leaders in Minneapolis, who are saying today that they are going to “dismantle” the city police department, in favor of a “transformative new model of public safety.”

This “transformative new model” is still to be determined, which means, in effect, none of this is actually happening anytime soon.

“Dismantle,” defined, incidentally, means “to disconnect the pieces of,” according to Merriam-Webster, which could imply stripping away non-core functions that have fallen on police, for example, stationing officers in public schools.

I’d grant that one, personally, having never been able to wrap my head around the value of the school resource officer concept.

But then the “defund the police” advocates also push the notion that we shouldn’t use police as first responders on domestic violence and mental health calls, which happen to make up a large chunk of 911 call volume, suggesting that a better approach would be to use mental health providers, social workers and victim advocates who are trained to deal with those kinds of situations.

That makes some sense, but not as an either/or, because it would make more sense to have mental health providers, social workers and victim advocates alongside law enforcement officers trained to deal with the nuance and inherent danger of domestic violence and mental health crises.

Just as officers in the current environment may not get the nuance of domestic violence and mental health situations, mental health providers, social workers and victim advocates aren’t going to be all that effective when facing a domestic abuser engaged in an ongoing act of violence against a family member, or a person in the middle of a mental health crisis threatening violence against himself or herself, or those in the vicinity.

The more you begin to think through this, the more you should come to realize that what needs to happen isn’t defunding police, but rather, increasing funding, with redirection in how that funding is being spent, with additional funding on top of that for increased utilization of mental health providers, social workers and victim advocates as additional first responders.

That will require more people on hand, not less, to be able to deal in a systematic way with the calls that come into 911 centers in communities across the country.

And this will mean more training – for law enforcement, for the folks from the social services side.

And new protocols – on who leads the response in a situation, what happens when the response needs to shift based on the threat level.

We’re going to need to address their compensation.

And do remedial and then recurring education and training.

This is your “transformative new model,” and the depth of what needs to happen to make it a reality is why it’s not happening anytime soon.

That is, if it’s going to be done right.

The danger here is if things get taken to the extreme in terms of the rhetoric becoming the reality.

In effect, it would mean that the responsibility for law enforcement would fall on, say, the next level up – the county, the state.

You knew that already.