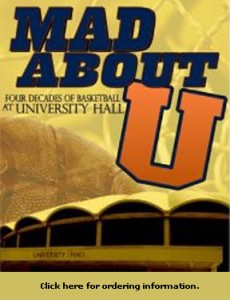 This UVa. team would end up in the Elite Eight. Earlier in the season, the Cavs had lost at Maryland by nine in a game that was still tight into the final minute. The Maryland student section serenaded Virginia on its way off the court with an “Overrated!” chant. Virginia led the rematch in Charlottesville by 30 at the under-eight media timeout when the UVa. student section returned the favor.

Virginia as a team was in the zone in the first half, putting up a 60-24 lead on the ‘Zags. The barrage reached a crescendo that turned into a carnival atmosphere by the end of the first 20 minutes.

Virginia comes in needing a signature win to get an NCAA bid. Duke is #3 in the country, and is otherwise, well, Duke. Joe Harris, in the role of Superman, goes for 36 to pump life into the Cavs’ NCAA hopes. (Which would not too much later be dashed.)

Ugh. Virginia actually came into this game ranked #3 in the country, its highest ranking in the post-Ralph Sampson era. Leading by eight with less than three minutes to go, Maryland, ranked eighth but on its way to a national championship, rallied late to literally stun the U Hall crowd. Yikes. This UVa. team fell all the way from #3 in the country to the NIT by the end of the season.

Duke had plastered Virginia in January in Durham by 42. UVa. coach Pete Gillen got teed up in the first half with Virginia down double digits. The Cavs rally in the second half, Jay Williams missed a free throw late, and Adam Hall rebounded a Roger Mason Jr. miss for a layup in the final second to pull out the win, which was punctuated by Travis Watson leading cheers from atop the media table three spots down from me.

Second-ranked UNC led by 17 in the first half, but Virginia took control early in the second half with a flurry of threes from Harold Deane and Curtis Staples, and held off a late Carolina rally to seal the W.

On an icy night in Central Virginia, the in-state rivals met for a chance to clinch a share of the ACC regular-season title. The Virginia win propelled the Cavs to a #4 seed in the NCAA Tournament.

This team also ended up in the Elite Eight, but at the time, the Cavs were just 7-6 and on a five-game losing streak. Terry Holland was at home recuperating from an unknown ailment that would later cut his coaching career short. And then Richard Morgan happened. Morgan lit up the Tar Heels for 39 points, hitting back-to-back threes midway through the second half to stop one Carolina rally, the second of the two coming from close to 40 feet after a UNC turnover in the backcourt. Oooh, goosebumps.

The opener for JPJ. As with the first game at U Hall, for which UVa. invited a good Kentucky team, the opponent was big-time, with Arizona preseason #10. And the Wildcats played like it early, leading by as many as 19 in the first half. Virginia took control in the second half, and the Jack has only once been louder.

And this was the one night. Virginia rallied late in regulation to send the game to overtime. Tied at 66 in the final seconds, Sean Singletary took the ball into the lane at Duke center Josh McRoberts, then faded away at the last moment to put up an impossible-looking floater. The ball went through the net with 1.0 seconds left. JPJ erupted louder than it ever would be, until …