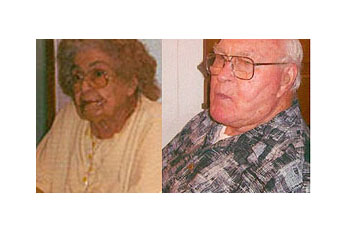 Today was already bound to be a sad day, what with it being my grandmother’s birthday, and her not being here.

Then it got sadder. My grandfather passed this afternoon.

He had been in decline for some time – years, many years, really. He was just a shadow of his former self, particularly after the love of his life passed away in January 2009. They’d been married 67 years.

I was with him when the news was broken to him that she had passed. I’ll never forget the moment. Imagine seeing somebody having his heart ripped out right there in front of you. This was worse.

The family had gotten word from the doctors earlier this week that his days were numbered. My mom called me to tell me, then said she knew he’d hang on until today.

I could write a book on the topic of, Everything I Learned In Life, I Learned From My Granny and Granddaddy. How I’m a writer with interests in a wide variety of topics, because when my parents split up I spent the weekends with my grandparents, and Granny Decker, Margaret Decker to some, Peggy to others, had interests in a wide variety of topics, always had books and magazines and newspapers around, and loved to sit on the front porch on summer nights talking. Or how I work harder than anybody I know, because Granddaddy, Paul Decker to the world, worked harder than any 10 other people that you could pull together to try to do more than he could in a day. The man built houses until he was 75 years old; it was how he worked himself out of the orphanage, starting at age 14 building chicken coops to support his brothers and sisters after their mother abandoned them.

He took me out with him on work sites and later had me with him on volunteer jobs that we did for a number of local churches. Then we’d go home on Saturday night and shoot baskets in the driveway until we couldn’t move.

Funny things that you remember, but this is the one thing that will stick with me about my grandparents. Granddaddy fretted constantly over whether Granny was good with whatever she was drinking, tea or Pepsi or whatever it was.

Do you have enough to drink? Need any ice? Want a new cup? He was relentless.

What I wouldn’t give for one more summer night on the front porch with the two of them.

Good news, Granny. Granddaddy is back to pester you about your drinks again.

Column by Chris Graham. He can be reached at freepress2@ntelos.net.