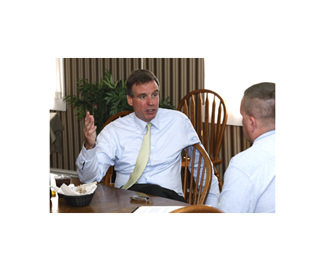 Mark Warner spent his first year in the United States Senate alternatively getting his feet wet and biting his lip.

“It was a little bit of earning your bona fides. I tried to do that particularly on the financial-reform bill, really dig in an on issue. And there were probably some times where I bit my lip when maybe I shouldn’t have,” said Warner, a former Virginia governor who was elected to the Senate in 2008 and who is talked about as being presidential material if he is ever so inclined.

And he appears to be so inclined. Warner, 55, made a brief foray into the ’08 presidential race and expects to be there again one day down the road.

The selling point for Warner is his bona fides in business, where he earned his mint founding Nextel before moving into politics. His appeal is bipartisan in nature – he won the Senate race in ’08 against another former governor and presidential candidate, Jim Gilmore, with 63 percent of the vote, and boasts approval ratings in this day and age where politicians on both sides of the aisle are reviled by voters in the 60s.

He ran and won that Senate race calling himself a “radical centrist,” but his first two years in Washington have been frustrating at times for Warner, as he admitted in his one-on-one interview with me in Staunton on Wednesday.

“The Democrats had the luxury of being close to 60, within one or two, and they didn’t have to go further,” he explained his marginalization on Capitol Hill, but a funny thing about politics is that the pendulum is ever swinging, and the swing that appears to be coming with Republicans looking to be poised to make significant gains in both the House and the Senate could put Warner in a much different position in the Senate come 2011.

“I think it gives us the chance for moderates to have a voice,” Warner said, noting that both sides will have to reconsider their approach to governing. “The challenge on the Democratic side will be, will they be willing to make some compromise?” Warner said. “The other challenge is going to be, can some of the candidates who are running on the Republican side this year, who are so far to the right, will they drag the Republican caucus further to the right, or will there be kind of a break in traditional conservatives who say, We can’t do business with them, we’ll do business with the Democrats?”

Warner developed a solid reputation for working across the aisle as governor, where he was able to win passage for several initiatives, including a 2004 budget reform that stabilized funding for core government services including K-12 education and public safety, through compromises with the Republican-majority State Senate and Republican-majority House of Delegates.

The inability to succeed in forging bipartisan compromise is a key point of criticism from Warner for President Barack Obama, who also failed, in Warner’s reckoning, to reach out to voters to lay out early on “how big the ditch was, and how long it was going to take to get out.”

Obama now seems to be acting under the pressure of the pending midterms with his efforts at reminding voters that the mess we’re in is really still all the Republicans’ fault. “People kind of had that in their gut already. I think it’s more, No matter how we got here, here’s how deep the problem is,” said Warner, who took a similar approach as he is advocating now back when he took over as governor in 2002, as the state faced a financial mess resulting from the 2001-2002 recession and the sloppy handling of state finances that he inherited from the Gilmore administration.

Warner took his case to the voters with a series of town-hall meetings across the state that helped lay the groundwork for the 2004 budget reform.

“We spent a long time in 2002 selling the problem. I’m not sure the administration totally sold the problem. Now, the house is burning down, so if they had taken a few months to sell the problem, we were in freefall there, so it’s easy for me to say this. But I think we could have spent more time explaining how deep a ditch we were in,” Warner said.

The backdrop to our conversation was a meeting that Warner had just held with a mix of small-business owners and local business leaders expressing a variety of frustrations with the way things are going – from the uncertainty over the specifics of the health-care reform signed into law in March to the inability of Congress and the president to get the economy jumpstarted even with hundreds of billions of dollars spent in the form of the now-infamous stimulus.

“The frustration in this room – I hear it everywhere. We’re in this deep recession, and why are you guys trying to do so much? I think there are valid questions,” said Warner, who nonetheless feels that Congress and President Obama were in the right to set and follow an ambitious action agenda.

“I think you need, broadly, an American business plan, that you get the American people to buy into. It doesn’t need to be down to every change in the tax code, but it’s got to be broader than just green jobs, or just manufacturing. We’ve got to say, Here’s where we’re going to get it right,” said Warner, who refers to the successes of Ronald Reagan in the 1980s and Bill Clinton in the 1990s in selling voters on broad plans of action.

A guy named Mark Warner was able to do that in Virginia in the 2000s. The Warner legacy in Virginia is the best-state-for-business rating that he left for Tim Kaine who then passed the mantle on to Republican Bob McDonnell.

“There’s an appropriate role for government,” Warner said. “Government can’t do it all. We had a relatively light regulatory hand. When we saw abuses, we took care of it, but we kept the relatively tax rate, the low regulatory burden.

“I was lucky in that I’d come in from the business community. I feel like at times that you can almost speak business. And you’re talking about deleveraging, or you’re talking about your balance sheet. There’s just terminology that people feel comfortable with. I sometimes feel with the administration right now that the business community is speaking here, tbey’re speaking here, they’re not that far apart, but they don’t hear each other,” Warner said.

A photo slideshow by Mark Miller. Photos available at www.markmillerphotography.com.

Story and podcast by Chris Graham. Chris can be reached at freepress2@ntelos.net.