Chris Graham: A path forward from protest to systemic change 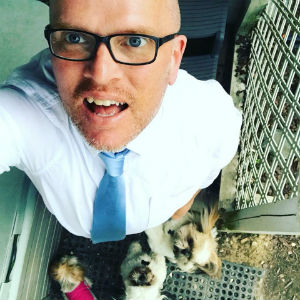 George Floyd is dead over $20. You might not know that.

His arrest was over an alleged $20 counterfeit bill passed at a convenience store.

Police originally tried to say that he resisted, and that’s why Derek Chauvin, the arresting officer, took Floyd to the ground, and maintained pressure on Floyd’s neck with his knee, for nearly nine minutes, as Floyd repeatedly pleaded, “I can’t breathe,” before losing consciousness, eventually succumbing.

Look at Chauvin’s face. I’m not publishing the photo here, since I don’t have the copyright, so follow the link.

Look at him. That’s the definition of white privilege there, isn’t it?

Consider that he knows he’s being recorded by multiple eyewitnesses. Presumably his body cam is activated and also gathering evidence that could be used against him.

He’s well aware of all of this.

And he’s still of the mindset that he will face no repercussions.

And he almost got away with it. The local prosecutor held a press conference on Thursday to state that he didn’t think there was enough evidence at that point to proceed with charges.

Despite the fact that the evidence was there for the world to see.

This is a story that we’ve seen repeated over and over the past several years; honestly, from the start of the Republic.

We used to sell African Americans as human chattel.

When we did, their lives were worth more to us than $20.

This is at the heart of the protests, which, sadly, frustratingly, have been co-opted by, guess who, white folks.

We’ll find out for sure when this is over that radical anarchists are instigating the looting, fires, property damage, thefts, assaults that are marring the largely peaceful majorities taking to the streets.

To those folks, the death of a black man at the hands of police is opportunity to bring attention to their stupid cause, such as they have a cause, other than to mock.

There are also undoubtedly pent-up feelings over the extended COVID-19 lockdowns that have sent 40 million to the unemployment lines.

COVID fatigue is almost certainly playing a role in the violence that we’ve been seeing on the streets in cities across America the past few nights.

Effectively, the lockdowns have come to an end. It will be hard to get that horse back in the barn, the notion that we’d been reminded of, ominously, for weeks, that if we dared to stick our heads outside, we’d catch COVID and spontaneously combust.

That’s not going to fly now that the social distancing violations that we’ve seen are the least of the concerns right now.

Between the folks who just want to get out of the house, and the organized rabble-rousers, the focus has been taken from where it needs to be.

More than 150 years from emancipation, more than 50 years since the Voting Rights Act, the Civil Rights Act, Brown v. Board of Education, there are still two Americas: White America, and the Other America.

In White America, a cashier looks at a $20 bill from me, thinks it’s counterfeit, calls 9-1-1, and the police knock on my door, ask me for my side of the story, get my name and number, promise to get back in touch.

We were reminded of what happens in Other America this week.

How do we change this?

First thing, obvious thing, street protests aren’t the end. They’re a means, certainly, toward the end, in getting attention to the cause, though the co-opting of the cause by the white anarchists is diluting the messaging, making it all about anger.

Anger is a motivation, but nothing is going to change if all this ends up being about is anger.

What needs to happen is the folks taking the case to the streets need to head down to city hall, to the state legislature, to Congress, on Monday, and speak truth to power, and if those with the authority to make change refuse to do so, there’s always an election coming ‘round.

This is, granted, the boring way.

You want to scream injustice to the mountaintops, so signing up to speak at a local government meeting, talking to your congressman, knocking on doors to get your neighbors to vote, can seem so … procedural.

It’s also why we are where we are right now.

You want to know why conservatives get their way on pretty much everything – packing the Supreme Court with anti-choice justices, blocking sensible gun control, perpetuating an inefficient, prohibitively expensive for-profit healthcare system that leaves millions without access?

Because they speak at local government meetings, talk to their congressmen, knock on doors to get their neighbors to vote.

It’s how things get done in a representative democracy.

I’d like to think that there are enough of us who agree on a path forward – from the center-right all the way to the sensible left – that we can get this done.

The protests are a starting point.

The violence, it must be said, clearly, unequivocally, needs to end, now, and those of us who know this need to be willing to say it, with emphasis, without fear of thinking that we’ll be interpreted as trying to undercut the legitimacy of the protests.

It’s the violence that undercuts the legitimacy of the protests, not us saying it.

The protests give the cause of justice attention, and energy.

Both can get us moving in the direction that we need to be going in.