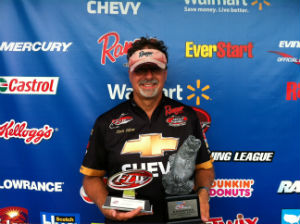 “The good Lord truly blessed me,” said Dillow. “It was anyone’s tournament out there. I was blessed with one big bite, a 6-pound, 15-ounce bass, that was the biggest fish of the tournament, and it was the difference maker.”

Dillow fished multiple areas in an eight-mile stretch beginning at the mouth of the Appomattox River to Richmond. He said that he fished his own homemade Dillow’s Perfect jig, which has won him multiple tournaments in the past, including a co-angler victory when the FLW Tour visited the Potomac River in 2012.

“I had to miss a few Shenandoah division events this year due to some health problems, so I told my wife that I was going for the win and either going to be a hero or a zero,” Dillow said. “I just beat on everything that I could find in the river. I was looking for big pilings, rock piles, brushpiles – basically everything that other guys weren’t fishing.

“I only caught six fish all day,” Dillow continued. “Most of them came by 10 a.m., during the high tide on the river. It really slowed down in the afternoon, and I didn’t have many bites.

“The key for me out there was just keeping that jig in my hand,” Dillow went on to say. “After my co-angler caught one on a worm, it got into my head and I really considered switching baits. I decided I was going to stick with the basics and either sink or swim. The Lord gave me that one big bite and it was my time.”

Rounding out the top 10 pros were:

Complete results can be found at FLWOutdoors.com.