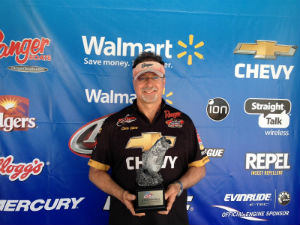 After his victory on Smith Mountain Lake, Dillow has now won the last two Shenandoah division events that he has fished, both of them with no practice.

“I’m truly blessed to have won back-to-back,” said Dillow. “And on my birthday weekend too, it’s awesome. I almost didn’t make it to the tournament because I was sitting in the office trying to make everybody happy with a real estate deal.

“I run a pattern every time I go up there,” explained Dillow. “I start out pitching my jig to docks and trees. I went into a pocket and caught a few on a jig and for some reason I decided to cast a jerkbait on my way out and I caught a good one. I realized the fish hadn’t moved up yet, so I started fishing that jerkbait on main lake points.

“Sometimes I was in up to 30 feet of water casting to the bank. Every fish that I caught were largemouth, but I also caught one striper bass and one catfish. I was just going fishing. I was targeting windy points in the mid-lake region.

“I think the key was the extra-long casts,” said Dillow. “I would get them to bite before they knew I was there.”

Dillow said he caught most of his fish on a Tennessee shad-colored Lucky Craft Pointer 100 and a green-pumpkin-colored Dillow’s Perfect Jig.

Rounding out the top 10 pros were:

Complete results can be found at FLWOutdoors.com.

Scott Howard of Bedford, Va., weighed in a five-bass limit totaling 14 pounds, 13 ounces Saturday to win $2,360 in the co-angler division.

Rounding out the top 10 co-anglers were:

The BFL is a 24-division circuit devoted to weekend anglers, with 120 tournaments throughout the season, five in each division. The top 40 boaters and co-anglers from each division qualify for a regional tournament and compete to finish in the top six, which then qualifies them for one of the longest-running championships in all of competitive bass fishing – the Walmart BFL All-American presented by Chevy. The 2014 BFL All-American is being held June 5-7 on Wilson Lake in Florence, Ala. Top winners in the BFL can move up to the Rayovac flw Series or even the Walmart flw Tour.