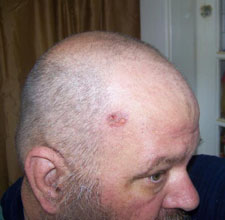 It has been a while since I have written or submitted a post. I shall touch on a serious matter that might affect us all and more with those with light skin. In the past, I have had skin cancerous cells removed, and just had a recent visit again. Since it now seems the sun has been strong in the Staunton area lately, it was time to move my fingers again in type.

With the help of www.skincancer.org/Skin-Cancer-Facts, I found some good information. Some need-to-know issues are as follows:

Skin cancer is the most common form of cancer in the United States. More than 3.5 million cases in 2 million people are diagnosed annually.

Each year there are more new cases of skin cancer than the combined incidence of cancers of the breast, prostate, lung and colon.

One in five Americans will develop skin cancer in the course of a lifetime.

Basal cell carcinoma (BCC) is the most common form of skin cancer; an estimated 2.8 million BCCs are diagnosed annually in the U.S. BCCs are rarely fatal, but can be highly disfiguring if allowed to grow.

Squamous cell carcinoma (SCC) is the second most common form of skin cancer. An estimated 700,000 cases are diagnosed each year in the U.S., resulting in approximately 2,500 deaths.

In 2004, the total direct cost associated with the treatment for non-melanoma skin cancers was more than $1 billion.

About 90 percent of non-melanoma skin cancers are associated with exposure to ultraviolet radiation from the sun.

Up to 90 percent of the visible changes commonly attributed to aging are caused by the sun.

Contrary to popular belief, 80 percent of a person’s lifetime sun exposure is not acquired before age 18; only about 23 percent of lifetime exposure occurs by age 18.

The vast majority of mutations found in melanoma are caused by ultraviolet radiation.

Approximately 68,720 melanomas will be diagnosed this year, with nearly 8,650 resulting in death.

Melanoma mortality increased by about 33 percent from 1975-90, but has remained relatively stable since 1990.

More than 20 Americans die each day from skin cancer, primarily melanoma. One person dies of melanoma almost every hour (every 62 minutes).

Women aged 39 and under have a higher probability of developing melanoma than any other cancer except breast cancer.

About 65 percent of melanoma cases can be attributed to ultraviolet radiation from the sun.

One blistering sunburn in childhood or adolescence more than doubles a person’s chances of developing melanoma later in life.

A person’s risk for melanoma doubles if he or she has had five or more sunburns at any age.

When choosing outfits, consider color and cloth: Dark or bright colors absorb more UV than paler shades, and denser fabrics, like denim or canvas, are more protective than sheer or loosely woven cloth. Loose-fitting clothes are preferable to tighter garments, which can stretch and expose skin to the sun.

Some manufacturers provide extra-protective clothing with UPF (Ultraviolet Protection Factor) labels, which indicate exactly how protective the clothes are: A shirt with a UPF of 45 lets in just 1/45th of the sun’s UV.

Basal and squamous cell carcinomas, which comprise over 90 percent of skin cancers, most often appear on the head and neck. Protect yourself with a hat, ideally one with a brim extending at least three inches all the way around to shade not just the face and scalp but the neck, shoulders, and upper back.

Avoid: Baseball caps and sun visors (though they are better than nothing).

Certain surfaces reflect UV radiation, so that it hits the skin and eyes twice, adding to your exposure. Sand reflects 15 percent of UV light; water, up to 10 percent; and sea foam, about 25 percent, according to the World Health Organization. Sunglasses with polarized lenses reduce glare, but UV protection is most important in sunglass selection: Choose a pair that filters out 99-100 percent.

Many sunglasses have tinted lenses, and the effects aren’t just cosmetic: Brown lenses create greater color contrast, improving visibility on solid-color surfaces like sand and grass. Yellow lenses are good for both contrast and depth perception.

Try: Oversized frames, and wraparound shades, which don’t let UV in at the temples.

Avoid: Sunglasses that don’t block 99 percent or more of UV radiation; any pair that slips down the nose, allowing UV to reach your eyes.

Sunscreen is only effective if you use enough. Apply a full ounce (two tablespoons) to the body, including a nickel-sized amount to the face, 30 minutes before heading outdoors. Spray sunscreens are also an easy-to-use option. Reapply every two hours outside, and immediately after swimming, towel-drying, or heavy sweating.

The Skin Cancer Foundation recommends SPF 15 or higher sunscreens (for extended beach stays, SPF 30 or higher may be advisable), and some combination of these UVA-blocking ingredients: stabilized avobenzone, ecamsule (a.k.a. Mexoryl), oxybenzone, titanium dioxide, and zinc oxide.

Water-resistant sunscreens are a boon to bathers, but their optimum protection lasts just 40 minutes (“very water-resistant” sunscreens last 80), and they should be reapplied immediately after getting out of the water. If you exercise, sport sunscreens, formulated not to run when you sweat, are a good option.

Finally, be really stylish by not following the crowd. Head to the beach before 10 AM or after 4 PM, when the sun is weaker, to minimize exposure and avoid the hordes.

I had another two moles removed lately. Please do some research on moles and have your doctor just check any you have. You paid for your visit, ask !!!!! My mole, situated on my head, started to bleed. Suspicious? Uhhhh, I think so….It was ordered by my doctor to put on a head scarf as not to irritate the wound further until I was seen by the skin specialist in Waynesboro. I could not wear a hat because the wound (mole) was on the hat hairline. I then decided to go to a local place of business with said “Head Scarf”.

I have some age and have the remnants of a stroke when walking or covering distance. I am not a threat to society. OK, anymore…

Some places of business do not allow you to wear head scarves as they signify gang related activities and you may be ejected from such establishment due to the wearing of such scarf.

As of lately, I have heard about 3 senior citizens who were also ejected. So, be aware that wearing of some scarves might not be allowed in stores. I switched to my Sponge Bob Squarepants Head Scarf, but shall never venture again into this establishment.

Please, be careful of the sun.