Chief of Staff | A new league website, New seating for Generals fans, VMI in the Valley

A new league website
Wow! That’s my first reaction to the new www.valleyleaguebaseball.com website, which debuted this week.
It’s cleaner, much more user-friendly and the best representation of our league that we could ask for. 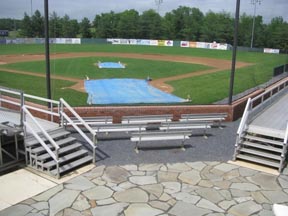 Check it out – it’s luxury seating right behind home plate!

The new VIP seats are going to be reserved for our Owner for people who sign up for our Owner for the Day program, where for $250 you literally are the owner of the team for a night, with premium seating behind home plate, a chance to go on air with our broadcast team in the press box and more.

The seats will go other nights for $7 a pop, first-come, first-served.

I doubt that I’ll ever get to sit in them, since I’ll be busy doing a million other things on game nights. Which means I’m jealous of y’all.

VMI in the Valley

The VMI baseball program has announced that seven players will participate in summer leagues over the coming months.

Seven Keydets will play in the Valley League, with four of those slated to participate in the inaugural season of the Rockbridge Rapids, based in Lexington. Sam Roberts, Graham Sullivan, Lefty Flora and Alan Watts will each suit up for the Rapids and will be joined in the Valley League by Jordan Ballard (Winchester), Alex Haitsuka (Luray) and Collin Flaherty (Haymarket).