Chicken salad out of chicken feathers: Sports broadcasting around a weather delay 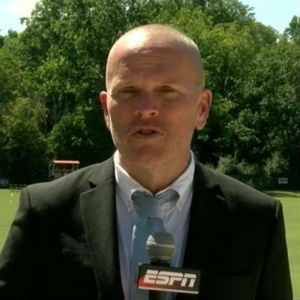 I aim to arrive on site for VMI soccer broadcasts on ESPN+ about an hour and a half ahead of game time. So I was on scene for Saturday’s VMI-American match, which was to kick off at 2 p.m., at 12:30.

First sign that it was going to be a long day: we were already in a weather delay.

Lightning in the area forced us indoors for the next 45 minutes. We couldn’t even go outside to record our broadcast open – the roughly 90-second preview that starts the broadcast, with a voiceover from me over top of highlights from previous matches and shots of the teams warming up.

We finally got that in, and I set up in the tent in our makeshift press box above midfield, taping my printed-out game notes and rosters near the TV monitor that helps me keep up with the action, particularly with numbers on the back of uniforms, which can be hard to read from up above.

The storm having cleared, the sun was out, and it was sticky hot, as is often the case after a summer thunderstorm.

It wasn’t all kosher, though, in my makeshift press box. The live stats, for one, weren’t working, meaning, if that persisted into the game, I’m calling the game blind, no stats, which, wow, that’s hard to do.

I’m panicking, but trying not to let you hear that.

We were able to get eight minutes and one second in before the next weather delay.

The sun was still out, but there was again lightning in the area.

About 20 minutes into the delay, the skies began to darken. Then the rains came, and it got so bad over the next two hours that those of us again forced inside – in the press box at Gray-Minor Stadium, the baseball field located next door to the soccer pitch at Patchin Field – assumed that we’d get word eventually that we were done for the day.

What do you do in a press box waiting for a game, and thus broadcast, to get going again? Well, it was a Saturday, the opening Saturday of the college football season, so we took to our phones to scroll through the scores.

We also took the chance to get better acquainted with everybody in the room. The folks working the camera can change from broadcast to broadcast, and the guys working VMI-American were all new to me, so there were new experiences to hear about from them.

There was also a group of soccer parents and grandparents stranded by the storm, nice folks from upstate New York, down to see their daughter/granddaughter play, except that the match at Radford on Thursday had been called due to bad weather that night, and now this was going on, so, that all sucked to have to go through.

We finally got the call around 4:30 that we were going to get started at 5, which was great. Well, kinda. For me, I had been hoping to be back at the home office by 6, so that I could take in the UVA-Richmond football opener. Soccer matches normally go just under two hours, including halftime and timeouts, and even if this one went to overtime, I was going to be home by 6.

Turns out, we got two of them, but, man, what a game. The two teams had come in undefeated, and at the end of regulation, it was all knotted up, nil-nil.

We got through the first, a couple of good scoring chances, but nothing into the net.

In the second OT, about halfway through, VMI played a nice ball into a corner-kick opportunity.

I don’t know why this was, but the thought popped into my head, get this right, because this could be the game-winner, and who knows, maybe it’s a goal that ends up on the SC Top 10 for the night, and you don’t want to be the boom goes the dynamite! guy.

I got the call right. Sam Franklin cleaned up a loose ball in front of the goal, placing the ball into the left corner of the net, and VMI had a walkoff win.

I still have work to do after the match is over. First, the live game recap, with highlights, before thanking everyone for watching. Then, I have to record a voiceover for the highlights for a video that goes on the VMI website, and that involves helping pick the footage first, in a process that, when you add it all up, takes about a half-hour.

That work all done, I looked at my phone. The UVA game, fortunately, had also gotten off to a late start, due to a weather delay, so at 8 p.m., my long day done, UVA and Richmond were just at the end of the first quarter.

A long day. Normally, I’m on-site roughly four hours. This one was seven and a half, and it was stressful.

The live stats only came back for us in the second half. The rain continued into the latter stages of the second half, so my makeshift press box was, yes, quite damp, my printed-out notes and rosters still only paper in the most general sense.

All that said, the crew, debriefing afterward, felt to a person that it was our best broadcast of the season to date.