You hear the words War and Peace, and you’re likely to think: long, too long. The classic Russian novel, by Leo Tolstoy, is long, at 1,500 pages, divided into 365 chapters.

But the book, 150 years old this year, still resonates with modern readers, says Andrew Kaufman, a University of Virginia professor and author of Give War and Peace a Chance: Tolstoyan Wisdom for Troubled Times.

Kaufman had the same thoughts about War and Peace that you did when he was first assigned to read the book for a Russian literature course as a college sophomore. Except that he couldn’t ruminate on how long the book was, because he had three weeks to read it for the class.

He quickly found himself drawn into the 19th century Russia that Tolstoy brought to life on the pages.

Kaufman re-reads the book from cover to cover every two years. The picture of War and Peace on the cover of Kaufman’s book: that’s his personal copy of the classic, “which looks like it’s been through a war,” Kaufman said.

What draws him back: “It’s Tolstoy’s capacity to engage readers in a very entertaining and gripping exploration of the universal human question that we all face at various times in our lives. And that has never gone away. That’s been a constant in my relationship with Tolstoy,” Kaufman said.

Relationship is a good word for describing Kaufman’s full-scale immersion into War and Peace.

“It wasn’t enough for me to just sit in a library and study secondary critical works about him,” said Kaufman, who has spent considerable time in Russia as part of his efforts to deepen his understanding of Tolstoy, to the point that he has developed relationships with members of the author’s extended family, and even wrote passages of his book in the Tolstoy estate.

“I also wanted to experience life close to the life that Tolstoy knew,” Kaufman said.

One insight that has come out of that immersion into the life of Tolstoy had to do with the author’s decision to give up the copyrights to his works. 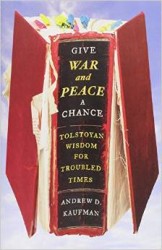 Future generations of Tolstoys were obviously impacted by this move. Not all see the decision as having negative consequences even so.

“What that made me realize was that the issues that were very much a part of Tolstoy’s own search, his own struggles, are very much still alive even in the Tolstoy family today,” Kaufman said.

War and Peace is still very much alive in its home country. The book, Kaufman said, “is to Russian culture what a book like Huckleberry Finn is to American culture, but even more so,” said Kaufman, noting that the book is required reading for schoolchildren, giving it the kind of status that makes it so that contemporary Russians can identify with characters and scenes from the book as important cultural touchstones.

“It’s in their blood. It’s part of how they see themselves. It’s one of their sources of national pride,” said Kaufman, noting the long ballet tribute to War and Peace that was a key part of the opening ceremonies for the 2014 Sochi Olympics.