Charles Snowden: Beast on the field, leader off it 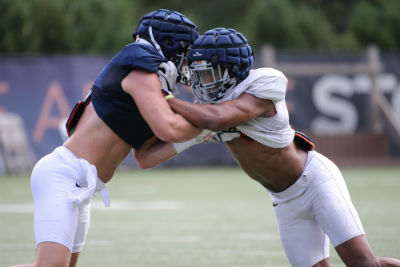 UVA senior linebacker Charles Snowden admits to being a bit taken aback at how college football players felt the need to go public with their push to have a greater voice in how they’re treated by coaches and administrators.

“I have been just excited to see athletes kind of around the country really grasped that power and that kind of fight for what they believe in, like Oklahoma State. I saw they had put out a list of demands and the stuff that they were demanding like, that, like, that’s normal here. And so, to me, it was like eye-opener like, Wow, I didn’t realize that it wasn’t like that everywhere,” Snowden said.

Snowden is no shrinking violet, certainly not physically, at 6’7”, 235, but more significantly, he’s a leader, on the field, in the locker room, and on Grounds.

His nickname within the program is “The President,” his position coach, Kelly Poppinga, said, “because one day that’s what, you know, who knows, he might be that guy, but that’s just who he is.”

“People love to follow that guy,” said Poppinga, who is also the team’s co-defensive coordinator. “It’s just the way that he carries himself, the confidence that he has in himself, and it’s great to have somebody like that around. Yeah, glad he’s around, so he can continue to help us build as a team like that.”

Snowden was a three-star prep recruit out of St. Alban’s School in Washington, D.C., a wispy 200 pounds spread over his 6’7” frame at that point, light even for a tweener power forward, much less a future gotta-scheme-for-this-guy outside linebacker.

As he’s grown into the frame, adding the 35 pounds while maintaining edge-rusher speed, the numbers have come along. As a sophomore in 2018, he led the nation’s linebackers with nine pass breakups and 11 passes defensed, and then last season, as the ‘Hoos made their way to the program’s first Orange Bowl berth, he became a monster in the pass rush, registering five sacks and a team-high 11 quarterback hurries.

Snowden, named to the preseason watch lists for the prestigious Bednarik and Butkus awards heading into the 2020 campaign, has developed into the kind of player that you build your unit around.

Poppinga acknowledged this week that having Snowden on one edge, and 6’5” junior linebacker Noah Taylor on the other, gives the UVA defensive brain trust maximum flexibility from a schematic standpoint.

“I would say, you know, based upon what Noah did last year, which Charles has done in the past, a team can’t go into the game and say, Hey, we’re going just at number 14 here, we’re going to number 11 here. I think they’re going to have to scheme it up, you know, play by play. … That’s the beauty of the 3-4 defense, and that’s why I believe we play the scheme that we play, because just the multiplicity of things that we can do with those guys,” Poppinga said.

The focus in the here and now is on the slog of a training camp like no other. Getting ready for a season in the heat of the summer is never easy, but doing so in 2020 against the backdrop of COVID-19, and the uncertainties of the public health response, has, to say the least, added to the challenge.

Snowden credits head coach Bronco Mendenhall with setting a healthy perspective on how his team needs to proceed.

“Coach is always talked about whatever’s going on in the outside world, leave it at the door, and when it’s football time, it’s football time,” Snowden said. “That’s really what this has been, and honestly, it’s really, I think, brought us closer like as a team and helped us just, with everything going on, all the social justice movements going on across the country, that’s brought guys together in a way that we normally wouldn’t be brought together. And that’s just another added experience, another added bond, that once you step on the football field, and it’s football time, guys feel that much more connected and practice that much harder.”

Of the guiding principles that Mendenhall bases his program on, Snowden has a favorite: “hard things together.”

“This is a unique challenge, hardship, that none of us predicted. And we’re going to get through it together,” Snowden said. “We’re kind of in our bubble, and it’s football sunup to sundown, really. But, I mean, the way I get through it is, I got my guys, we got each other, and just seeing the next man do it, that inspires me to just get through it, like seeing my teammates go through a day, practice, film, lift, meetings, recovery, just seeing them do that. Nothing extra, nothing more than that.

“Just seeing someone do that. I mean, it helps me get through it. And, I mean, I wouldn’t trade it for the world,” Snowden said.