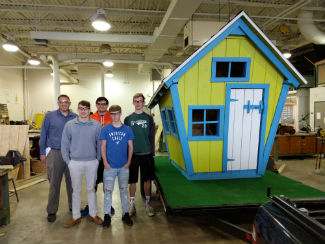 In 2017, Broadway High School Ag Power students partnered with Central Valley Habitat for Humanity, the Harrisonburg and Rockingham County affiliate of Habitat for Humanity International, for a raffle fundraiser that would last April through August 2018.

From the partnership emerged the “Crooked Playhouse,” a wooden children’s playhouse that was constructed with less than five 90-degree angle cuts on the entire project. Over the course of the summer, the playhouse raised approximately $1500 for the organization through the sale of raffle tickets.

Painted Habitat for Humanity green and trimmed in blue, the playhouse traveled Harrisonburg and Rockingham county this summer, winning the Best Commercial entry award at the 26th Annual Singer’s Glen Fireman’s Parade in June, and participating in the Bridgewater Lawn Party parade in July.

You may have seen the playhouse at the Harrisonburg Farmer’s Market, volunteers for the organization handed out information on Central Valley Habitat for Humanity on three separate Saturday mornings, and then attended the Rockingham County Fair in August. The organization also recognizes Ragtime Fabrics on route 33 for selling tickets and parking the playhouse outside their business at Waterman Square.

Executive Director David Wenger attributes the success of the fundraiser to the many volunteers, “I am thankful to Belle Stemper and her staff [at Ragtime Fabrics] for helping us to publicize our playhouse. This is just another example of how the community supports families in Harrisonburg and Rockingham County.”

Set up next to the Chicken Shack, the organization utilized 30 volunteers over the 7 days of the fair, raising money and selling tickets.

The drawing was held on the evening of August 18, announcing the winner of the playhouse as Lisa Wilson, “I was at the Rockingham County Fair when I bought my tickets. As a parent of grown children it occurred to me that my children would have loved playing in this wonderful structure when they were three and four but no more than that. I thought that it would be great for many generations of three and four-year-olds to have the opportunity to enjoy it.”

“I was surprised when I got the call that I had won the playhouse. I don’t usually win anything,” says Wilson, “So I bought the tickets thinking that if I won I would donate it to a place where little kids play. Trinity Presbyterian had just re-vamped their playground and this fits perfectly.”

Wilson donated the playhouse to Trinity Presbyterian Church for their community playground on Maryland Ave. in Harrisonburg, saying, “Central Valley Habitat for Humanity is a tremendous organization, with lots of experience, success, and local support. Habitat is one of the organizations we [Trinity Presbyterian Church] contribute to and we have members who serve on the board. As a society we all benefit when our citizens are fed, housed, educated, healthy. I applaud programs that work to address these needs, especially on a local basis.”

According to Wenger, “The Crooked Playhouse project was a fun project that generated a lot of conversation and excitement. I think it is great that it began with construction by students at Broadway High School and will end as a kid favorite on the playground at Trinity Presbyterian Church.”

About Central Valley Habitat for Humanity

CVHfH was first organized in 1988 and just recently celebrated 30 years of building up the community. Habitat for Humanity has an open door policy: All who believe that everyone needs a decent, affordable place to live are welcome to help with the work, regardless of race, religion, age, gender, political views or any of the other distinctions that too often divide people. In short, Habitat welcomes volunteers and supporters from all backgrounds and also serves people in need of decent housing in accordance with Virginia Fair Housing laws. Visit the website www.centralvalleyhabitat.org or find them on Facebook @CentralValleyHabitat.