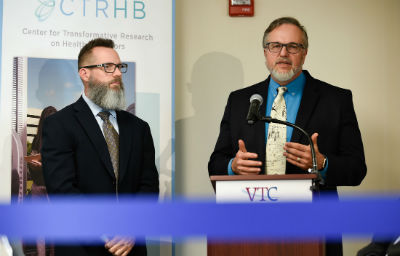 Matthew Hulver (left), the head of the Department of Human Nutrition, Foods, and Exercise in the College of Agriculture and Life Sciences, and Warren Bickel, a professor at Fralin Biomedical Research Institute, talk about plans for the Center for Transformative Research on Health Behaviors during the center’s ribbon-cutting in 2017.

The center will soon be reviewing new applications to identify new projects for a second round of funding.

The projects will extend collaborations between Carilion Clinic and Virginia Tech to make positive impacts on health behavior in the community, according to center co-directors Warren Bickel, a professor at the Fralin Biomedical Research Institute, and Matthew Hulver, the head of the Department of Human Nutrition, Foods, and Exercise in the College of Agriculture and Life Sciences.

The projects were selected through a competitive review and will be funded up to $20,000 per year through the combined resources from the Carilion Clinic Research Acceleration Program, the Virginia Tech College of Agriculture and Life Sciences, the Office of the Virginia Tech Vice President of Health Sciences and Technology, and the center.

Globally, breast cancer is the most common cause of cancer death among women. The most common subtype is hormone receptor positive breast cancer, which accounts for approximately 75 percent of all diagnoses. Adjuvant hormone therapy has been shown to improve overall survival in patients diagnosed with early stage disease; however, between 30 percent and 50 percent of patients do not adhere to these medications as prescribed.

Researchers will examine the decision-making processes that underlie adherence to hormone therapy in breast cancer patients, with the purpose of exploring why many patients struggle with taking these potentially life-saving medications.

Led by Jeffrey Stein, a research assistant professor at the research institute, and Jennifer Vaughn, an oncologist at Blue Ridge Cancer Care and faculty member in the department of internal medicine at the VTC School of Medicine, the project explores how patients value the advantages and disadvantages of hormone therapy medications, including a reduced likelihood of cancer recurrence but also possible adverse side effects and prescription costs. In addition, the project will investigate a novel intervention,  episodic future thinking, which may increase the likelihood of treatment adherence.

The role of decision-making also figures into another center project, this one involving Mikhail Koffarnus, a research assistant professor, and Stephen LaConte, an associate professor, both at the Fralin Biomedical Research Institute, and Robert Trestman, the chair of psychiatry and behavioral medicine at Carilion Clinic and chair of the department in the VTC School of Medicine.

Researchers will investigate the effectiveness of START NOW, a skills-based group therapy program, used in conjunction with medication-assisted treatments to help individuals with opioid-use disorder.

Trestman was part of a team at the University of Connecticut Health Center that developed the START NOW process to teach emotional regulation and impulse control to people who need to change destructive behaviors. It is a low-cost treatment tool that has proven effective for more than 15 years in settings ranging from schools to correctional institutions.

The Fralin Biomedical Research Institute and Carilion Clinic researchers will embark on a clinical investigation to examine the effectiveness of adding the START NOW therapy to medication-assisted therapy to help people coping with substance use disorder. The scientists will study decision processes and also use fMRI brain imaging to track changes in neural activity that coincide with START NOW therapy.

Evidence is growing that bacteria that live in our intestines may be associated with cardiovascular risks.

Kevin Davy, a professor of human nutrition, foods, and exercise in the Virginia Tech College of Agriculture and Life Sciences,and Jose Rivero, a cardiovascular disease physician with Carilion Clinic, are exploring gut microbes that may be metabolizing a natural component of the human diet and generating a substance that is converted in the liver into a compound known as TMAO, short for trimethylamine N-oxide, which may promote cardiovascular disease.

A multidisciplinary team of investigators with extensive experience performing interventional studies targeting cardiometabolic dysfunction is conducting the study. The project, now part of a larger NIH-funded trial on the same topic, is intended to establish proof-of-concept for a large-scale study to measure the effects of TMAO generated by gut microbiota on blood vessel function in middle-aged adults.

Researchers said the study has potential to advance basic science findings that have been made in cell culture and rodent models to interventions that will help people. Gut microbiota represents an important potential target for therapies aimed at maintaining or restoring vascular endothelial health and function, and, in turn, reducing cardiovascular risk, morbidity, and mortality.