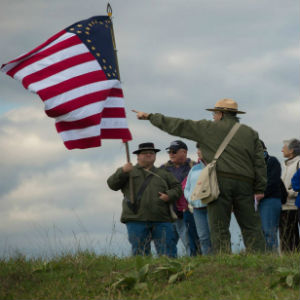 Cedar Creek and Belle Grove National Historical Park has announced a series of special “History at Sunset” programs. These ranger-conducted presentations cover a variety of subjects and provide visitors an opportunity to see sites normally not open, or widely accessible, to the general public. “The history of the Shenandoah Valley is rich and fascinating,” according to Lead Ranger Eric Campbell, “These programs offer an opportunity to learn some of its many stories in a more detailed fashion.” Explore and learn about some of the “hidden gems” of the park and the Shenandoah Valley. Each program is free and lasts between 90 minutes to two hours.

May 25, 7:00 p.m.
The Tragic Deaths of Stephen Ramseur and Charles Lowell: Examples of a Generation Lost

The Civil War devastated a generation of young men, in their 20s and 30s. This program examines the lives of two such men who fought at Cedar Creek and the impacts their deaths had on their families and communities. Meet Park Ranger Shannon Moeck at the main parking lot at Belle Grove (336 Belle Grove Road, Middletown, Virginia). This program will involve a car caravan system (visitors follow the ranger’s vehicle).

The Shenandoah Valley’s unique geology and geography contributed significantly to its agricultural, social, and military history. Join Ranger Rick Ashbacker for this car caravan tour which will explore many of the physical features and materials that were critical to the development of the Cedar Creek and Belle Grove region. Meet at the National Park Service Visitor Contact Station (7712 Main Street, Middletown, Virginia).

Join Park Volunteer Marcus LeMasters as he explains archeological techniques and practices, how those have been applied to various locations on the Cedar Creek battlefield and what has been learned from these projects. Meet at the Visitor Contact Station (7712 Main Street, Middletown, Virginia), for an overview. Mr. LeMasters is a Virginia state certified Archeological Technician and a member of the Northern Shenandoah Valley Chapter of the Archeological Society of Virginia.

July 13, 7:00 p.m.
Remnants of the Stonewall Brigade at Cedar Creek

By the fall of 1864, the famous “Stonewall” Brigade was a shell of its former self. The Overland Campaign had taken a massive toll on the brigade, but nevertheless the men fought on. Find out how this famous unit performed at the Battle of Cedar Creek. Meet Park Ranger James Horn at the National Park Service Visitor Contact Station (7712 Main Street, Middletown, Virginia).

July 27, 7:00 p.m.
A Diamond in the Rough: The Forgotten Story of the Bowman-Hite Farmstead

Join Ranger Kyle Rothemich as he explores the history of the Bowman-Hite Farmstead. This farmstead stands as a unique example of a 19th century Shenandoah Valley agricultural landscape. Learn about the families who called this place home, structures that shaped their experiences and soldiers who marched by during the Battle of Cedar Creek. Meet at Belle Grove (336 Belle Grove Road, Middletown, Virginia) for an introduction. Visitors will then car caravan over to the Bowman-Hite farm.

August 17, 7:00 p.m.
“When the conflict is ended mercy again asserts itself.” Treating the wounded at Cedar Creek

The Battle of Cedar Creek left in its wake over 8,600 Americans killed, wounded and captured; the second bloodiest engagement fought in the Shenandoah Valley. Join Ranger James Horn as he examines the treatment of wounded and the general practice of medicine during the Civil War. This special program includes living history demonstrations presented by staff of the National Museum of Civil War Medicine, and will be held at St. Thomas Chapel, which was used as a hospital by the Union army following the battle. Meet at St. Thomas Chapel (7854 Church Street, Middletown, Virginia).

August 31, 7:00 p.m.
Not Just Black and White: Discovering the Complexities of Enslavement in the Shenandoah Valley

This program explores the use of slave labor in the Shenandoah Valley. Learn how the settlement history, agriculture and iron industries shaped the use of slavery in this region. This program will take place at Belle Grove Plantation where a total of 276 enslaved people worked and lived over a 68 year period. Join Ranger Shannon Moeck for this stationary program at Belle Grove (336 Belle Grove Road, Middletown, Virginia). Visitors are encouraged to bring a lawn chair.

After spending most of the Civil War fighting in Louisiana, the Union 19th Corps was sent east in 1864, eventually becoming a critical force in Philip Sheridan’s Army of the Shenandoah. Attacked from two directions at the battle of Cedar Creek, the corps initially retreated from its trenches, but later found redemption during Sheridan’s late afternoon counterattack. Join Ranger Rick Ashbacker to explore the key actions and locations of the 19th Corps at Cedar Creek. Meet at the National Park Service Visitor Contact Station (7712 Main Street, Middletown, Virginia).

The Medal of Honor is the most prestigious award a member of the military can earn. At the Battle of Cedar Creek, 21 soldiers were awarded this medal. Join Park Ranger James Horn to find out where these men earned their Medals of Honor, and hear their stories of bravery. Meet at the National Park Service Visitor Contact Station (7712 Main Street, Middletown, Virginia).

October 19, 4:00 p.m.
Sabers and Spencers: Custer and the Cavalry at Cedar Creek

By late 1864, the Union cavalry had evolved into a ferocious offensive strike force under aggressive leaders like Brig. Gen. George A. Custer. At the battle of Cedar Creek, Custer used not only his own leadership skills, but also superior weapons, horses, and tactics to outflank the Confederate army. Join Ranger Rick Ashbacker to follow the actions of Custer’s division as it fought and chased the Confederates from early morning until late evening on October 19, 1864. Meet at the National Park Service Visitor Contact Station (7712 Main Street, Middletown, Virginia).

November 10, 5:00 p.m.
Free at Last: The Complicated Road to Freedom for Emmanuel Jackson