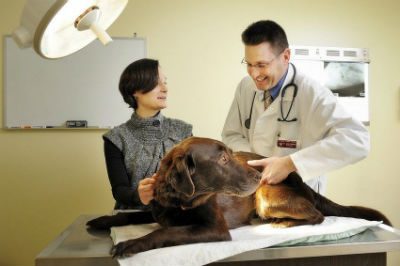 As busy as Irving Coy Allen is, siloed research gives him pause. In his thinking, if one is working at a large research university that’s rich with expertise and inspiration, why tackle humanity’s greatest challenges — say, cancer — alone?

An associate professor of inflammatory disease in the Department of Biomedical Sciences and Pathobiology at the Virginia-Maryland College of Veterinary Medicine, Allen has made a point throughout his career to reach out and weave together Virginia Tech’s experts to conduct unprecedented health research.

Most recently, Allen and researchers from the veterinary college and the College of Engineering are collaborating to study tumor removal and immune system activation. Simply put, their goal is to advance cancer treatments.

Published in EBioMedicine, the first of the team’s planned series of papers, which addresses breast cancer mortality rates and inadequate treatments for metastatic disease, has been well received. Together, the team is examining mammary tumor ablation with high-frequency irreversible electroporation, or H-FIRE, a second-generation modality that uses high-frequency bipolar electric pulses.

Based on the team’s findings, the new technology is proving to be an effective tumor ablation strategy that not only induces immunological cell death, but also promotes systemic anti-tumor immunity.

H-FIRE, Allen explained, is based on IRE, a technology developed by professor of biomedical engineering and mechanics Rafael Davalos that utilizes electric pulses to induce cell death. Although H-FIRE is still in the early phases of investigation, IRE is currently being evaluated in preclinical and clinical trials for tumor ablation in a variety of cancers, including pancreatic cancer. Significantly, several lines of evidence suggest that IRE is effective in immune system activation.

“H-FIRE is a method to treat cells with electricity that doesn’t cause them to explode, but causes their membranes to open up. Essentially, they leak, so it’s a way to destroy cells of a particular kind, using electrical properties,” Allen said. “But that is beyond me. That’s what the engineers tell me.”

Although he is an immunologist, Allen said he’s equally as comfortable designing different types of animal models for human application — and therein lie his contributions.

“Engineers would show up at my door with this model and would detail what they think it does. Literally, they’d say, ‘So, I developed this, and I think it can cure cancer. Can you show me how?’ And we would work together to figure out what the device does and how it works.”

Many times, Allen said, the engineers had developed a drug or unique delivery system, so they would collaborate to come up with ideas for the types of models in which they would want to test their components.

According to Allen, his background in drug discovery establishes his credibility in the role. “My experience gave me the chance to say, ‘Okay, I’ve done this before. We can plug your drug, your device, into the same model and see what happens. Through word of mouth, I guess, I began collaborating with engineering groups, and these partnerships are beginning to bear fruit. Last year, we had five or six publications on nanoparticle drug-delivery, different types of drugs targeting cancer.”

In the eyes of Margie Lee, head of the Department of Biomedical Sciences and Pathobiology, Allen’s work will flourish in the coming years. “In his short time here, Dr. Allen has become a leader in interdisciplinary research teams in which immunology is either a cause, treatment, or diagnostic tool for disease,” she said. “His approaches are contributing to innovative ways to diagnose and treat cancer, and his contributions are likely to improve lives.”

Surprisingly, Allen’s collaboration with the IRE research team was born of happenstance: He was intrigued by a story shared by Sheryl Coutermarsh-Ott, then a doctor of veterinary medicine (DVM) student whose dog, Autumn, had been diagnosed with histiocytic sarcoma. In response, clinicians at the college offered experimental treatment.

A member of the clinical team was John Rossmeisl, the Dr. and Mrs. Dorsey Taylor Mahin Professor of Neurology and Neurosurgery, who was conducting research on IRE as part of Davalos’ project.

Coutermarsh-Ott agreed to the treatment, later telling Allen that, within a few days, not only had Autumn’s local tumor disappeared, but so had the metastatic lesions — the sources that often lead to death. “That got my attention,” Allen said. “I was like, ‘Wait, wait, wait. Tell me more about this. You did what?’”

Seven years later, after the treatment had effectively cured Autumn of that cancer, she died of old age. Meanwhile, Coutermarsh-Ott, who completed her DVM in 2011, joined Allen’s research team as a doctoral student, earning her Ph.D. in 2017. She is now an assistant professor of anatomic pathology in the Department of Biomedical Sciences and Pathobiology.

The results have been promising. The team’s latest paper discusses how local mammary tumors in mice begin to decrease and ultimately disappear when treated with IRE. The truly amazing finding, however, is that the metastatic tumors, such as those in the lungs, also decrease because of the unique way that the treatment stimulates the immune system.

Part of the process, Allen said, is mapping how the immune system becomes engaged and how researchers can make that process more reproducible in humans, especially those with cancers that are much more difficult to cure.

“What’s nice about this treatment strategy is that it doesn’t matter what type of cancer is being treated, even though it was tested with a model mimicking metastatic human breast cancer,” Allen said. “And the treatment is nonthermal, which is significant when treating breast cancer, for example, because it’s important that the breast not develop a lot of scarring that makes mammograms more difficult to read. In the end, it’s a no-heat, less-scarring local treatment that also may be very effective at treating metastatic disease.”

The next generation of innovation

As the next generation of IRE, H-FIRE negates some of the technology’s previously noted limitations, such as the need to administer a muscle relaxant before treatment.

“The side effects are far fewer, and the recovery time much less,” Allen said. “To be honest, some of these treatments could even be done as an outpatient.”

In highly vexing cancers, such as breast cancer and pancreatic cancer, the tumors are immunosuppressive, which is problematic. H-FIRE, however, turns a tumor into one that’s more inflammatory.

“We usually think of inflammation as bad, but it’s actually good,” Allen explained. “It’s how our immune system gets educated, gets turned on. By making a tumor visible to the immune system, not only can the immune system attack the local tumor, it will find and attack all those little metastatic tumors that the surgeon can’t even see, but that will otherwise show up weeks to years later. Although this is not necessarily everything, it’s certainly a piece of the puzzle to get a better outcome.”

Up next, Allen said, is applying the procedure to other cancers, including glioblastoma. To that end, Davalos and Rossmeisl have secured funding from a nearly $10 million National Institutes of Health grant. Their work will focus on applying such discoveries to both veterinary and human patients.

“We can cure any kind of cancer in mice and have gotten really good at doing that,” Allen said. “Applying our findings to human care becomes the challenge.”

Without question, Virginia Tech’s strong engineering and veterinary medicine programs have proven to be of great benefit to Allen’s research, and he is motivated to continue collaborations across colleges and to encourage other faculty members to do the same.

“Blacksburg is such a small town. When I go to a PTO meeting for my kids, it’s like a faculty meeting. We’re also interacting with each other at 3 a.m. in Kroger when we’re in the aisle looking for our kids’ cough medicine. It’s great seeing my colleagues and collaborators outside of work and around town, and it’s very common to end up at some point in the corner talking science. There’s no reason why people shouldn’t be interacting more across campus, as well. It is important to break down silos and conduct collaborative research, and Blacksburg is a great place for this.”

The university’s collaborative environment is, after all, what drew Allen to campus in the first place. “It’s nice having people come and want to work together than to just work against one another. That’s why I chose to be here. I like the collaborative nature of the university; really, the atmosphere here has just been fantastic.”