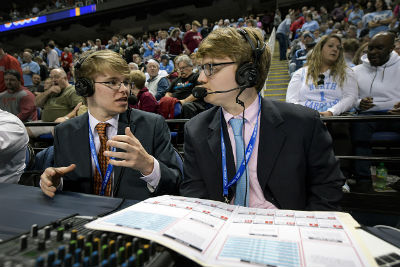 David Cunningham (left) and Shelton Moss break down hoops during one of the few games during this year’s ACC Tournament. Photo courtesy Virginia Tech Media Relations.

David Cunningham hoped to see history made at this year’s ACC Tournament, but he never expected it to be for what didn’t happen on the court.

“All of the sudden the clock at the arena just stops and everyone [in the media] gets the same email,” said the Virginia Tech junior about that day during the tournament in Greensboro, N.C. “It said, the ACC is canceling the tournament and Florida State has been named the champion.”

“It was so weird to watch that unfold before my eyes,” Cunningham said.

Cunningham was one of six Virginia Tech students granted unprecedented access to cover all 14 games of the tournament as a part of the university’s Topics in Sports Communications course and its student-led, multimedia journalism platform, 3304 Sports.

“When we launched 3304 Sports, one of our goals was to get our students to cover the ACC Tournament and experience one of the great events in sports,” said Bill Roth, professor of practice in the Department of Communication in the College of Liberal Arts and Human Sciences. “The conference was terrific in granting credentials to our student broadcasters. They got to call the games and ask questions in post-game pressers, as well as produce podcasts, record stand-ups on the court, and interact with national and regional media members.”

The students were scheduled to be there for the duration of five-day event, but the COVID-19 pandemic derailed those plans.

Following the first two days of games, on March 12,  the conference joined the growing number of collegiate and professional sports organizations by sidelining their athletic activities. Florida State, the conference regular season champion, was declared the winner of the tournament’s automatic bid to the NCAA tournament, just minutes prior to its tipoff against Clemson.

“It was absolutely mind boggling,” said Liam Sment, a senior and the graphics and photography director for 3304 Sports. “I never expected to be at center of the sports world as it was falling down around itself and to be one of a couple hundred people there covering it.”

It was the type of moment the students working with 3304 Sports had been unknowingly preparing for all year.

Launched in March 2019, 3304 Sports is a student-led extension of the sports media and analytics major. It provides students with the opportunity to hone their journalism skills in a real-world environment by working with the Virginia Tech Athletic Department to cover NCAA Division I events.

“We’re just really grateful to have them work with us,” said Cunningham, editor-in-chief for 3304 Sports. “Ten years ago we wouldn’t have been able to do this.”

Roth, the long-time, legendary Voice of the Hokies, said the unexpected circumstances of the ACC Men’s Tournament actually provided the students with an excellent real-world learning opportunity.

“Basically, they went from covering games to covering an unprecedented national news story,” Roth said. “That’s where their journalism training kicked in, and they were terrific. We actually have an assignment in the Sports Journalism class called, ‘You’re covering a game, a news story breaks out,’ and sure enough, that’s exactly what happened.”

For Sment, that meant hustling to different positions in the arena, including at one point climbing into the stands, to ensure that he got the best visuals as the news broke.

“I just snapped into work mode,” he said. “One of the best photos I got was when [ACC Commissioner John] Swofford came out onto the court. He handed the trophy to FSU and there’s not a single player smiling. It was such a weird and unexpected scenario.”

As a broadcaster, Cunningham said he leaned into the many lessons he’d learned throughout the major, including the value of being right about information over being the first to delivery it.

“A situation like this is not something you get to do very often,” he said. “Being there, five or six feet away from John Swofford when the ACC tournament was canceled is something I’ll remember for the rest of my life.”

Cunningham said he felt the situation will impact both how he approaches his craft and life in general in the future.

“It’s just not taking anything for granted and soaking up every moment,” Cunningham said. “I’m going to make sure that I’m making the most of my time here.”

“We were the only school that had students calling every game of this tournament and I’m hopeful we’ll be able to play all the games next year in D.C.,” Roth said.