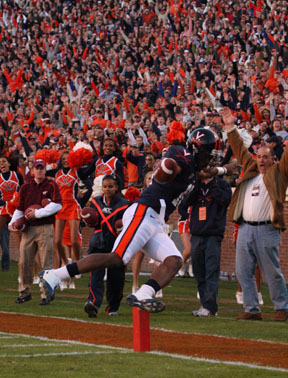 Virginia head football coach Mike London announced Monday he has purchased 100 season tickets in section 117 at Scott Stadium. Coach London will give away these season tickets for free to fans as prizes awarded through an essay contest. The winners will be a part of Mike London’s Fanatic Cavalier Club.

“Virginia fans have really embraced the coaches and student-athletes in the program during my first seven months here as head coach,” London said. “The passionate support of our fans will make a difference at Scott Stadium this fall, and I want to do my part to help that effort.”

To enter the contest fans must submit an essay that answers these questions: what makes you the most loyal, passionate Virginia football fan and how do you show your Cavalier spirit? The submission must be 1,000 words or less. A picture of the fan in his or her best Virginia gear must be also submitted to support the essay.

The submission deadline is Friday, Aug. 6 at 5 p.m.

A committee, including Coach London, will judge the submissions and determine the winners. The contest winners will be announced on Friday, Aug. 13. Each winner will receive up to four 2010 Virginia football season tickets and four 2010 official fan t-shirts by Nike. The number of season tickets awarded will be based upon the number of immediate family members in the winner’s household. One grand prize winner will be chosen to receive a trip for two to Los Angeles for the Virginia football game at Southern California on Sept. 11.

Each winner must make a commitment to attend all seven home games and use each ticket in his or her allotment. Members of Mike London’s Fanatic Cavalier Club are expected to be role models for other fans throughout the stadium in showing their support for the Virginia football team.

To enter the contest and for more information, fans may click here.

Season tickets awarded as prizes through the essay contest can neither be moved from this area nor returned to coincide with an existing season ticket purchase. Existing 2010 Virginia football season ticket holders are eligible to receive a credit towards the purchase of 2011 season tickets if they are chosen as a winner. Fans may only win season tickets as part of the club for one season.