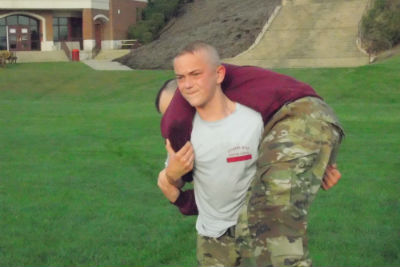 When I was invited to shadow the 2020 New Cadet Breakout Event, I wasn’t sure what to expect. I had gone through breakout myself almost four years ago. I knew it had changed, but was curious as to how much. Did it still instill the values of teamwork and cooperation amongst your brother cadets? I decided to go and shadow the event, hoping to capture what is arguably the most influential event in a Fishburne cadet’s time at school, second only to graduation. I showed up with a camera and a notebook, unsure of what to expect.

“Ready?” shouted battalion training officer Kobe Parker to his assistants spread out around the barracks. “Ready!” They all replied. Then, what can be described as organized chaos erupted, music blared from the barracks speaker system, two cadets beat drums and symbols together, bells were ringing, half a dozen cadet leaders were beating against the new cadets’ doors. Lights quickly flipped on and the rooks, as new cadets are affectionately referred to, could be seen scurrying around, trying to find the correct uniform, many of them were still in a sleepy daze, none of them expected the day to start this early.

At 6 o’clock the rooks, about 40 in all, formed upon the bricks in front of Classroom Row. Cadet non-commissioned officers took turns leading the formation through exercises. Jumping-jacks, burpees, and mountain climbers were all done together and in cadence, with leaders off to the side ready to correct anyone who fell out of sync with the others. I stood off in the wings observing the expressions of each rook. Many were nervous, some were excited, some were almost asleep, but they all looked like individuals.

At 6:15 they were marched to breakfast. As they stood silently at attention behind chairs, cadet Sgt. Maj. Jarvis spoke to them about their meal.

“Don’t eat too much. We have a long day ahead of us, eat something light but healthy, and make sure to drink lots of water,” he bellowed, his voice echoing off the high ceiling of Sonneborn Mess Hall. I remembered my sergeant major giving the same speech when I went through breakout. After being dismissed to eat the rooks sat and silently ate their breakfast. While most heeded the sergeant major’s advice, a couple of rooks were spotted eating loads of sugary cereal and juice. Jarvis looked at me and said: “Don’t worry, they will regret that later.”

After breakfast, the formation moved to the front parapet in front of the flagpole. There I decided to follow cadet Max McKendry, an eighth-grader from Virginia Beach. I asked him how he felt, and he responded eagerly, “I wasn’t too sure about it when y’all woke me up, but now I feel good.”

The commandant of cadets, Sgt. Maj. Wily D. Carrion, USMC (Ret.), arrived to lead the formation on a 3-mile run around the City of Waynesboro. After a brief speech, he took off running down Main Street. The rooks got into columns of twos and chased after him. McKendry was towards the front of the pack, where he liked to be. We ran through Downtown Waynesboro, passing iconic local spots like the Wayne Theater, the French Press Cafe, and Benny’s Pizza. After passing the old Ice Factory, we went down to the South River and gathered around cadet Sgt. Jaxson Hostuttler, from Harrisville, W.Va., where he gave a rousing speech about perseverance. “You have to have the will, the determination, to overcome obstacles, no matter how difficult it may seem,” he said. McKendry reared his head back and yelled, “Er-rah!” A motivational phrase that is common at Fishburne. “Er-rah!” the whole formation yelled back in affirmation.

Then we took off running again. We passed many local Waynesboro residents, who would often wave and cheer us on. We passed by the YMCA, the police station, churches, and houses. Once we rounded the track near Waynesboro High School, the end was in sight. The white flag pole with the star-spangled banner flying in the early morning breeze giving the rooks the motivation to push for the finish. As the group formed up on the front field, they were broken down into squads. I accompanied Mckendry and the rest of the first squad to one corner of the field. They formed up and briefed by cadet 1st Sgt. Gavin Senger. “You will be doing a circuit of team-building exercises. You will do these together, as a team!” he said. McKendry and his squad then began their exercises. They performed group pushups, with each other’s feet on their shoulders, hill sprints, buddy drags, fireman’s carry, and many other exercises designed to build a sense of teamwork.

Once the other squads had finished their circuits, we formed back up in the back of the school, where an unusual sight awaited.

All the seniors in the school had boarded a bus, a rope was attached to the front fender, the Rooks were told to pull the senior-laden bus 25 feet to complete their breakout. It seemed impossible, but these cadets had already been through a lot this morning. They had learned to work together to overcome anything. “Let’s go!” shouted McKendry as they lined up on the rope pulling with all of their might.

Grunts, howls and hollers erupted from the seniors and they all got off the bus to help out their new brother cadets. The combined strength of the corps’ oldest and newest cadets pulled the bus the 25 feet. The rope is dropped and cheers and hugs and celebrations take place. I stand off to the side and do my best to capture the moment. However, even I can’t resist the urge and join in with McKendry and the other cadets in celebrating.

Story by Riley Malone. Malone is a senior at Fishburne Military School from Waynesboro.