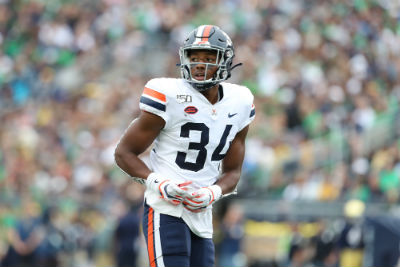 Bryce Hall was as high as late first round in some mock 2020 NFL Drafts, but the UVA cornerback, coming off an injury sustained in October, fell all the way to the fifth round.

You may remember that Hall was a two-star recruit coming out of high school on his way to being named a second-team All-American.

Which is to say, he was undervalued once.

“You know, where I landed, I think it may motivate me even more to work 10 times harder,” said Hall, who went to the New York Jets with the 158th pick. “That’s not my set motivation, to prove everybody wrong. I know what I believe in myself and what I can be one day, and that’s my ultimate goal, but you know, if that happens, that happens.”

Hall ended up being the 17th cornerback taken in the draft. Obviously, the broken leg that sidelined him for the last eight games of the 2019 season ended up costing him big-time.

Well, that, and the unusual spring.

COVID-19 shut down pro days and cut off opportunities for teams to make one-on-one connections with players in the weeks leading up to the draft.

And importantly, for players like Hall, coming off injuries, teams couldn’t have their medical staffs do evaluations.

This could mean millions for a guy like Hall.

“I think that definitely played a factor in me going a lot later than where I went currently,” Hall said. “But at the end of the day, I’m exactly where I’m supposed to be. I know God brought me here for a reason. So, I trust that. I don’t I don’t ask too many questions that are above my head. And I’m here now, so I’m ready to look forward to now.”

Next up for Hall is getting up to speed with what he needs to do to get ready for the NFL.

“I’m not in control of where they put me. I just know I’m going to come in and work as hard as I possibly can,” Hall said. “I’m going to trust in what the coaches and whoever else is in charge of that. I’m focusing on everything I can control, which is getting back to normal, you know, better than back to normal, and just working my butt off for this program, this organization.”