Bronco, when he tunes in, doesn’t suffer TV football commentators 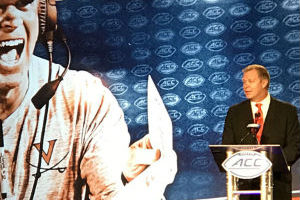 UVA football coach Bronco Mendenhall, when he has to watch football at home on TV, is a lot like you, in that he turns the volume down, because he can’t stand the announcers.

“We have a rule, and I don’t even know if I should share this, but I’m going to. When we watch the games, we have the announcers turned off,” said Mendenhall, who had the weekend off with Virginia’s scheduled game with Louisville moved back a week because the Louisville program had to work through a mini-COVID-19 positive test outbreak.

Mendenhall probably also shouldn’t tell you that he didn’t watch much football on his off-week, you know, given how he makes his living from football – and his living depends on people tuning in, to watch the brief spasms of action from games that serve to interrupt the endless streams of three-minute ad buys.

A reporter had asked Mendenhall at his Monday presser if he watched “much football” on his weekend off.

“‘Much’ is a subjective term,” Mendenhall said.

From a look at the declining TV ratings for college football this fall, “work therapy” in the place of tuning in is what most of you are doing most of the time as well.

That’s another story for another day.

Mendenhall did relate that he watched the entire Notre Dame-Clemson game this past Saturday night, “which might be the first complete college game I’ve watched in years,” he said.

His take on the two-OT thriller: “what a great game.”

Mark Richt’s job as the lead analyst at the ACC Network is secure, for now.

His tepid take on Notre Dame-Clemson notwithstanding, Mendenhall couldn’t offer anything in the way of insight or critical commentary for the NBC broadcast team.

If only because he didn’t hear a word that Mike Tirico or Tony Dungy had to say over the course of their four-hour broadcast.

“How I react to them and what they were seeing and what I think is accurate really doesn’t match most of the time,” said Mendenhall, detailing that it’s actually his wife, Holly, who insists that the volume is turned down when he watches football at home.

“Holly can’t stand what I say back to the commentators who can’t hear me anyway on how inaccurate the comment was they just made, so, we turn the volume off,” Mendenhall said.

I’m not allowed to watch CNN with the wife anymore, either, so, I can relate.