Bronco on beer: ‘I really have no control over it’

Front Page » Sports » Bronco on beer: ‘I really have no control over it’ 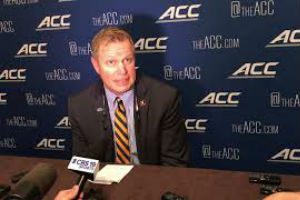 Bronco Mendenhall isn’t exactly on board with the enhancements to gamedays at Scott Stadium announced by UVA Athletics last week, at least the enhancement related to beer.

“I really have no control over it,” he said when asked about beer sales at his Monday weekly presser.

The athletics department announced last week that beverage gardens will be located inside Scott Stadium’s east and west gates that will serve beer, wine and hard cider to fans of legal drinking age.

This is a bow to a nationwide trend in college athletics to tap into what you have to assume will be a powerful source of new gameday revenues.

Don’t count Mendenhall among the most enthusiastic out there on this.

“I had no involvement in the process whatsoever. I was just notified that it was approved and that it’s going to happen. It appears that college sport is following suit of the NFL and there is … I’m sure there is a revenue component to that,” Mendenhall said.

A reporter noted in a follow-up question that Mendenhall seemed resigned to fate on the matter of beer sales at UVA games.

I really have no control over it, and my hope is just that fans come to support our team.

“I think there is always separation you have to have,” Mendenhall said. “Yeah, as a nonalcohol drinker myself there is a personal view, and then there is kind of an amateur sport view and then an entertainment view, and also a revenue view.

“And so, again, the primary thing I can do is attract young people that will represent the school really well, have them play in a manner that would have folks really want to come and support them. That’s what I can influence.”