Bronco: No update on QB situation, as ‘Hoos look for answers 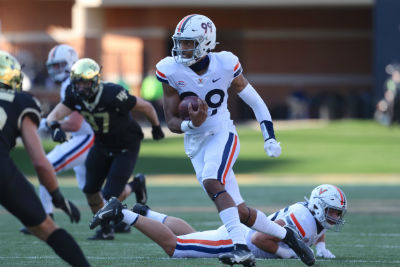 UVA had to make a go of it at Wake Forest on Saturday without starting quarterback Brennan Armstrong, who was knocked out of the NC State game a week earlier with a concussion.

Armstrong’s status for this coming weekend’s game at Miami is still up in the air and may be most of the week, at least publicly.

“I don’t know yet,” coach Bronco Mendenhall said at his weekly Monday Zoom presser. “I get a daily report, but the next chance I’ll have to kind of announce or talk through it will probably be Thursday. But no, I don’t have a report.”

Stone was the primary passing-game QB, and his limitations were obvious – he completed 24 of his 42 attempts for 193 yards, which works out to 4.6 yards per attempt, and two INTs.

Thompson, who had battled Armstrong for the QB1 job before injuring his shoulder in camp, ran on all 10 of his snaps, gaining a team-high 71 yards on the ground.

Armstead ran for 46 yards and a TD on six carries on the ground, and completed one of his three pass attempts, a nine-yard sideline pass to Billy Kemp IV in the second quarter. 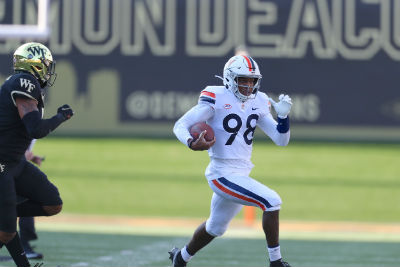 Put it all together, and you’ve got a QB throwing for 202 yards, running for 144 (including seven on three scrambles from Stone).

Most weeks, you’d take that.

Credit to Anae and the three QBs for making it seem seamless.

“That was the intent, is we thought, what the intent is and being a defensive coach matching up and adjusting to different tempos, different styles even within the same drive, it’s a challenge,” Mendenhall said. “I thought we did a very strong job of rotating the different players we had within drives and within the game, to use the skill sets that they have to help move the football and keep the opponent off balance.

Which is a good thing, that he liked it, because Mendenhall might have to go back to the hybrid again, given the medical realities of the moment.

Armstrong is still in concussion protocol, and Mendenhall conceded Monday that he’s not sure when that status will change.

“Nor do I ever know. And it really never is something I even come close to influencing, you know. There is way too much at stake, so I just wait, and whenever they our training staff and the medical community says they’re back, then that’s great. So we prepare as if they won’t ever be back and then when they are that’s great. Very well could see a similar approach, if that’s what happens,” Mendenhall said.