Bronco Mendenhall: The guy in charge of social distancing 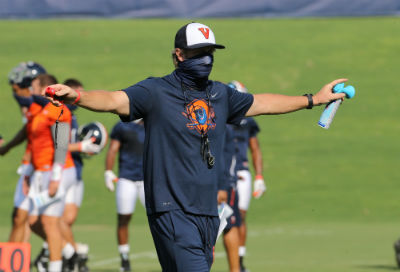 “Literally, I’m spending my entire time here managing the social distancing, masking and safety to play the game. My coaches are actually coaching football. What I’m doing is, I’m the number one virus manager on our team right now. And that’s working so far. It’s not nearly as much fun, but it is working,” said Mendenhall, describing UVA football practice in 2020, as teams across the country try to manage their way around COVID-19.

If you’ve been able to catch an episode of the HBO series “Hard Knocks,” which this summer is following the two teams from Los Angeles, the Chargers and Rams, you have a good idea of what things are looking like in Charlottesville.

A lot of walk-throughs, no-contact drills, lots of emphasis on spacing.

Mendenhall is in charge of the horn that signals when players need to space.

“The NFL is using something like scatter, where they run away from each other. I do that periodically. If that’s not done quickly and effectively, then the team is held accountable immediately for that, which they don’t like,” Mendenhall said.

“I’ve never run up a practice structure like we’re currently running,” Mendenhall said. “There’s really nothing about our program that looks the same as what a normal organization looks like. I’ve erred really, really far on the side of caution and safety.”

Virginia lost its first scheduled opponent, VMI, when the Southern Conference decided to shutter fall sports, and Mendenhall said Friday that he doesn’t think there will be an effort made to replace VMI on the schedule.

That means the ‘Hoos would open 2020 on Sept. 19 at Virginia Tech, giving Mendenhall and his staff an additional week to get the team ready.

The focus, thus, to this point, football-wise, has been on making up for the lost time from not having had spring practice – skill work, developmental work, not so much on scheme.

“At some point, we’re going to have to add enough football to be ready to play,” Mendenhall said. “I’ve just been holding out to see truly, to be honest, if we are going to play. What will the leadership say? And will there be some kind of direction that way that may be more concrete than what we currently have? And so, uncertainty, ambiguity, and differences had led have led to this gulf of varied approaches, and, and varied perspectives, I guess is the best way I can put it.”

It was obvious Friday as Mendenhall talked with the media via Zoom that the strain of having to balance the varied perspectives is weighing on him.

The approach from Mendenhall is to prepare “like we’re absolutely playing.”

“When I saw the ACC medical advisor saying that, yes, we could play, we could mitigate it, it would take effort and all that, once that happened, I have to prepare, like we’re going to,” Mendenhall said. “That allows the way I can coach the way I can address my team in a manner that gives them their best chance. And then if, if we don’t play, that’ll be an easier adjustment than preparing not to play and then all of a sudden, I think we will. So, I’ve chosen to do that. I don’t know what percentage. Man, it changes in my own head so frequently, um, but I can’t even predict it.”