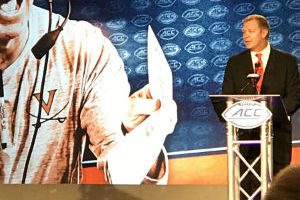 It sounds like something out of science fiction, and this is just getting Virginia football players back in the weight room.

Not the practice field.

Not the stadium on gameday.

Just to get guys back training, there’s all manner of byzantine requirements – social distancing, cleaning protocols, complete with what coach Bronco Mendenhall described as “Ghostbusters backpack(s) – all with no certainty that there’s even going to be a season, at least in the fall.

“We still have to anticipate and prepare as if we’re opening on time,” Mendenhall said Monday, equating the situation facing him and other coaches and coaching staffs as being akin to preparing a special forces unit for a mission, waiting for the green light to go forward, not knowing if it will ever come.

“You’re never sure if the green light’s actually going to go on. It might stay red, but you have to be ready as if it’s going to go off at any time,” said Mendenhall, who acknowledged that the approach at this time still has to be that the ‘Hoos will open on Sept. 7 in Atlanta against Georgia.

“The best thing I can do them is act as if we’re going to play and play in our opener, have a plan for that, and anything else that happens after that, we’ll adjust, and mostly that’ll be adjusting down, not up, and so it’s always easier to ramp down than ramp up. So, we’re going to prepare as if we’re opening with Georgia,” Mendenhall said.

It wouldn’t be wise to bet the farm on that, given recent developments that seem to have college football, if the season gets under way at all in the fall, being a conference-game-only proposition.

Listening to Mendenhall talk through the scenarios, it sounds like he’s thinking the season is going to be cut short, at best, and that he wouldn’t necessarily have a problem, given the current climate, going conference-only.

“Anything that reduces travel, reduces air travel, increases proximity play, and keeps our players safer, I’m for that, and we have a better chance to control that within conference than out of conference. That’s why I’d be for it, because I think it benefits and gives our student-athletes their best chance to be safe.”

Several ideas are being thrown around for how a schedule can be thrown together for 2020. Mendenhall feels anything less than an eight-game schedule wouldn’t be worth the effort.

“Especially some that want the NFL, especially some considering redshirting years, especially just with all the things they want to be together, they love each other, and they want to play under all these unique circumstances, and wearing the masks and doing all that they’re, they’re having a blast together. And I’m loving that part of it. Anything less than eight (games), I don’t think would be appropriate to ask of them,” Mendenhall said.

A lot is being asked of a lot of people.

None of this is easy.

“It’s very, very challenging right now to acknowledge the threat of the virus, acknowledge the possible risk to the players we love and care about, and then ask them and ask them appropriately to condition and become ready for this this game that’s challenging to prepare for even under normal circumstances,” Mendenhall said. “We’re all feeling kind of an internal turmoil of asking, but not asking too much and trying to keep players safe, but not at the expense of being prepared. And so, there’s a lot of things going at the same time, which I feel kind of an internal friction point. But I’m still wrestling with and working on the right approach.”