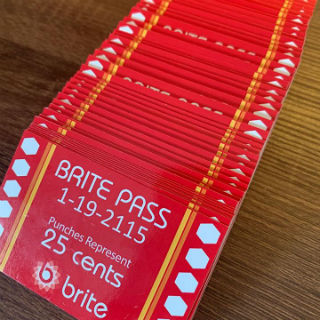 A 12-punch farecard is being introduced as a new form of fare payment for the convenience of BRITE bus riders.

Beginning Monday, March 4, BRITE will begin selling and accepting pre-paid farecards, which are an alternative to needing exact change or a token to ride the bus. These farecards are available in 25 cent or 50 cent increments, and each farecard has twelve punches. The farecards may be used for fare payment on the BRITE fixed routes or for BRITE Access service.

BRITE farecards can be purchased for either $3 (25 cent card) or $5 (50 cent card) from the driver on the bus, at the BRITE Transit Facility in Fishersville (51 Ivy Ridge Lane, Fishersville), and at the CSPDC offices in Staunton (112 MacTanly Place, Staunton). Farecards will hold no monetary value and are non-refundable.