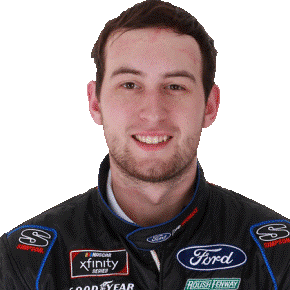 It’s not often you command a race car on the track and take it to victory lane with battle scars. On Saturday afternoon in the ROVAL race at Charlotte Motor Speedway, Chase Briscoe made a little history.

Briscoe, driving in the Biagi-DenBeste Racing Ford Mustang piloted a spotless Mustang stock car to a top ten qualifying finish just a few hours before the green flag and the start of the Blue Cross of North Carolina 200.

Qualifying ninth, Briscoe carefully plotted his course to the front through the rigorous and challenging ROVAL course at Charlotte and using some savvy pit strategy to lead the last 24 of 55 laps on the 2.28-mile, 17-turn road course.

Briscoe held off Justin Marks after the last restart on Lap 45 and crossed the finish line 1.478 seconds ahead of Marks, driving the No. 42 Chip Ganassi Racing Chevrolet. It was Briscoe’s first win in the NASCAR Xfinity Series after chalking up two wins in the NASCAR Camping World Truck Series in 2017 and on the dirt in Eldora in 2018.

“This is unreal,” said Briscoe following the race. He added that his Ford Mustang was four seconds off in practice, “and my guys stuck behind me and kept working with me. It’s just an honor and privilege to drive a race car and to do it for my hero, (Stewart-Haas co-owner) Tony Stewart, and get a win.“

Following the victory, Briscoe reflected that he felt as though his career in the racing world was not going well this season.  “I feel like my career was getting really bad this year, and I needed to get my stock back up, and I just can’t believe it.” Winning the inaugural ROVAL Xfinity race was “huge” in the eyes of Briscoe..

“Everybody had to adapt to it and figure it out,” he added, saying that “I don’t know that I’m necessarily the best at it, but I felt like I just tried not to hit anything, and this thing hardly has a scratch on it.”

“These Roval races are always challenging for these series to put on, given the confines of the oval, but I thought it was great,” Marks said. “If we’re going to reinvigorate this fan base and we’re going to regain some positive momentum on our side, we’ve got to think outside the box and do things like this.”

Pole winner and playoff driver Austin Cindric rebounded from a spin in Turn 6 while leading on Lap 14 to finish third in front of Ryan Preece and series leader Christopher Bell.  Bell advanced to the second round of the Xfinity playoffs with his recent victory at Richmond. Daniel Hemric fell to 15th in the race after a misjudging the track, but fought his way back to finish 10th.

The Xfinity playoff field will be reduced to eight contenders after next week’s Dover race.

The Blue Cross of North Carolina 200 was the first initial test of the new ROVAL design introduced to the media back in late January. Testing sessions at proven that the course was a challenge and Saturday’s race was no different on the result.

The Blue Cross of North Carolina 200 honored breast cancer survivors before the race in recognition of Breast Cancer Awareness coming up in the month of October.

The ROVAL Weekend at CHarlotte Motor Speedway continues on Sunday with the running of the Bank of America ROVAL 400, beginning at 2:00 PM ET.